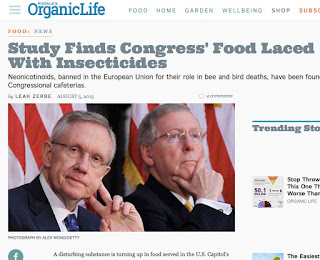 While a lot of people think Congress acts crazy, there may be a reason. Is it the neonics in the cafeteria food?

All kidding aside, this is a serious subject - a new study just released by the American Bird Conservancy (not eco-nazis, but nice, law abiding, tax paying folks) and Harvard University says that the systemic insecticides known as neonicotinoids integrate into the very fibers of fruits and vegetables Congress eats. Anyone who eat nonorganic food can expect the same results.

So neonics have penetrated into the highest levels of government. And into the rest of us, as it turns out.

According to the U.S. Center for Disease and Prevention, the average American already has 29 pesticides in their body - the kind that don't disappear.

Foods with the most neonic residues:

Here's how much has been used the last few years in California - on wine grapes alone:

As you can see, in 2013 (the latest year stats are available for), imidacloprid was used on more acres (and in higher amounts) than ever before.

Whether or not the neonic residues are in the wine itself, they are in the fields, and making their way into the watershed.

In the watershed, insects eat them, fueling a vicious cycle of bird die offs from baby birds being fed regurgitated, pesticided insects by their parents.

As the ABC/Harvard study reported, "the fact that we detected neonicotinoids in 91 percent of samples does not necessarily mean that all of these foods were treated with the pesticides. Soil and watershed contamination with neonicotinoids is widespread."

A recent Dutch study found that neonics were responsible for a 35% die off in farmland birds over a ten year period. Scary stuff. And we don't really know what it's doing to humans. Some environmentalists are asking if the neonics are our generation's DDT - and again, it's the birds (canaries in the coal mine?) who are signaling the early warning signs of distress.

So why are vineyards in the North Coast - Napa, Sonoma, Mendocino (as well as growers statewide) still using imidacloprid? The systemic insecticides have been used on 10 percent of Sonoma's acreage - mostly around Healdsburg and Geyserville. In Napa, the use is concentrated along Highway 29.

As the wine industry asks us to believe in their sustainability programs' standards, wouldn't it be nice if they decided neonics were not acceptable under their guidelines? Until that day comes, the only standard that says No to neonics is the organic one.

If you're buying wine from Napa and Sonoma (that isn't from a certified organic or biodynamic vineyard), the chances are 10 percent that you're subsidizing someone using neonics.
Posted by Pam Strayer at 9:07 AM