Perhaps you were the type of person who never placed much value on bird counts, thinking to yourself, "What are those birdwatchers looking at now?"

Now new, groundbreaking research from Holland published in Nature proves that the bird counters have been doing a very good job of collecting valuable data. In fact, their data provides the key proof that the insecticide imidacloprid may indeed be a candidate for what some are calling the Second Silent Spring.

While a number of studies have implicated the neonicotinoid as a toxin contributing to the decline of bees as well as birds, none have shown such a definitive link as the study from Radboud University in Holland which identified links to the most severe bird declines to imidcaloprid found in surface water.

The insecticide imidacloprid is widely used in agriculture around the world. In California, wine grape growers used 44,000 pounds of it on 190,000 acres (roughly 40% of the state's bearing vines).

Earlier studies had linked the insecticide to invertebrates. This is the first study linking it to vertebrates.

"This is the first study that correlates imidacloprid to possible indirect harmful effects, via the food chain, for vertebrates...It explains the decline better than other factors, such as land use," said Professor Hans de Kroon, the lead investigator.

"Neonicotinoids were always regarded as selective toxins," de Kroon said. "But our results suggest that they may affect the entire ecosystem."

The English newspaper The Guardian reported, "At least 95% of neonicotinoids applied to crops ends up in the wider environment, killing the insects the birds rely on for food, particularly when raising chicks."

The Guardian went on to quote that the study found, "water pollution levels of just 20 nanograms of neonicotinoid per litre led to a 30% fall in bird numbers over 10 years, but some water had contamination levels 50 times higher. 'That is why it is so disturbing - there is an incredible amount of imidacloprid in the water,' he [de Kroon] said. 'And it is not likely these effects will be restricted to birds."

The study was created in conjunction with the Sovon Centre for Field Ornithology, which has one of the densest bird monitoring networks in the world, and which has collected and stored data regularly over a long period of time.

"We have sufficient data available on common bird species to analyse densities and trends in their numbers," said Ruud Foppen of Sovon.

For more, enjoy the study's very professional video, in English, featuring the researchers themselves:

Though imidacloprid has been banned for two years in the EU in an attempt to allow bee populations to recover, it is still widely used in the U.S. American beekeepers have filed lawsuits against the EPA to try and ban its use in the U.S.

The EPA has said it will take five years to study the issue.

Here's where it's used on wine grapes in the state of California.

If you're a bird lover, you might be tempted to patronize wineries that don't use imidacloprid in their vineyards.

Unfortunately, imidacloprid is showing up in California surface water in agricultural areas, and 19% of water samples taken by scientists from the California Dept. of Pesticide Regulation in a recent study of three Central Valley sites, exceeded allowable levels for aquatic life, according to the article written by the CDPR scientists published in the March 2012 issue of the Bulletin of Environmental Contamination and Toxicology.

How much is used in the fine wine growing regions of Napa and Sonoma (where many people live near vineyards)?

As you can see below, the highest use clusters along Highway 29 in Napa Valley and around Healdsburg and Geyserville.

Why are wine grape growers using imidacloprid? "Imidacloprid was used during warmer weather between budbreak and harvest to control mealybug infestations," says the CDPR's report on the 2012 data (the most current report available).

Last year, the head of Napa Green, the vintners' association's green program, who's always happy to show folks the bird boxes scattered throughout his vineyard, waxed eloquently (in the Premiere Napa Valley catalog) about how pristine the Napa Valley is, never mentioning that he uses imidacloprid over his 50 acres of vines - which kills birds.

Perhaps it's time for the Napa and Sonoma Audobon Societies to invite the Dutch researchers over for wine and cheese and to see their bird count data and determine the impacts of imidacloprid on local bird populations. 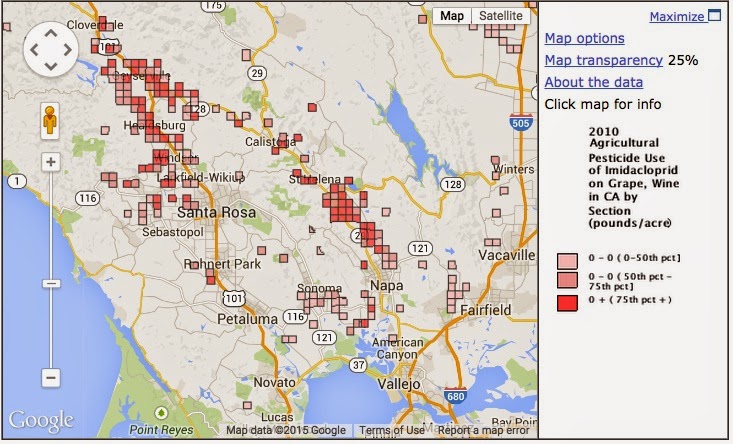 To reiterate, from the Dutch study, Dr. de Kroon: "Neonicotinoids were always regarded as selective toxins. But our results suggest that they may affect the entire ecosystem."

Once again, it's head scratching time - time to contemplate the outdated Newtonian model we use to look at the world - and toxins in particular. When it comes to matter, isn't the universe a lot more like quantum physics tells us it is - interconnected - than what that old materialistic model from Newton says?

Here's de Kroon (quoted in the Guardian), "All the other studies [on harm caused by neonicotinoids] build up from toxicology studies. But we approached this completely from the other end. We started with the bird population data and tried to explain the declines. Our study really makes the evidence complete that something is going on here. We can't go on like this any more. It has to stop."

We are all, but especially here in the U.S., playing a catchup game, to find the smoking gun, when we might act more like some of the Europeans do - creating national programs for pesticide reduction (as France is on a course to do), banning imidacloprid (like the EU has done), and doubling our intake of organically grown wines (which is the case in Australia as well as Europe).

Has the wine industry responded to this study? Not at all. Have consumers? No.

Time to ponder - over a nice glass of wine?
Posted by Pam Strayer at 8:44 PM