A Tasting - With a Twist

It was that rarest of birds - a wine tasting where everything was organically grown. The wine distributor Mountain Peoples Wine Distributing held its first ever San Francisco tasting at Pause Wine Bar yesterday, bringing together more than a dozen vendors to display their wares.

There at the end of the front room was Ed Fields, Natural Merchants, with an extensive lineup of Greek, Italian, French, Spanish and Austrian wines. Fields' company, based both in Oregon and Spain, sells a lot of imported, organically grown wine to Whole Foods. In fact in 2014 Whole Foods' awarded Natural Merchants with its top supplier of the year award in the wine and beer category.

Fields says the latest LOHAS ("Lifestyles Of Health And Sustainability") research shows that consumers now place more emphasis on non GMO than on organic, so he has added non GMO labeling to all of the wines he imports. 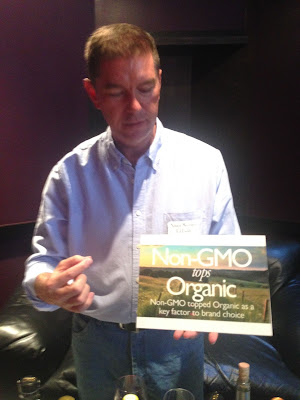 [In response to the popularity of non GMO criteria, CCOF and others have now created a new organic label that explicitly states that organic is Non-GMO.]

There were also plenty of domestic wineries in attendance including two from Lake County - Beaver Creek and Chacewater - that I rarely get up to visit, so it was great to sample their latest vintages. Beaver Creek proprietor and winemaker Martin Pohl was on hand to show off his estate rosé, 2013 Cabernet, 2013 Cabernet blend (Fairytale), and Petite Sirah, all from biodynamic vines. 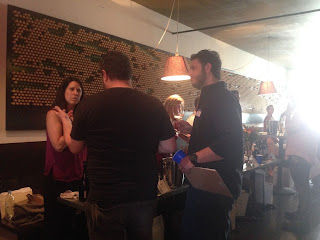 Chacewater is a bright spot in Lake County, as well, and has been a rising star in recent years. Its Merlot ($21) is outstanding and won a much deserved Double Gold at the San Francisco Chronicle's Wine Competition this year. 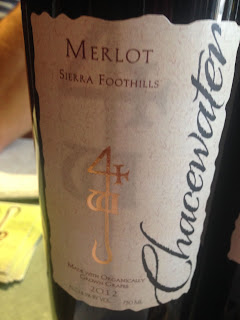 Chacewater was also pouring the inaugural release of its Muscat Canelli - only 200 cases (of half bottles) made this year. It was very refreshing. Sweet, yes, but not too much. Another of my favorite wines of the day. 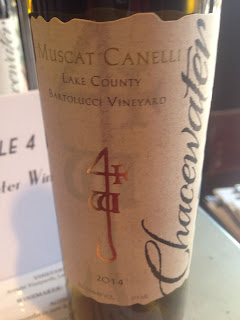 There was also a great Moscato from Italy courtesy of Natural Merchants. Pizzolata offered two Prosecco's as well. All three are available at Whole Foods.

From Hopland in Mendocino, Jeriko makes duos of Chardonnay and of Pinot Noir. One (the lower priced) is from organic vines (beige label); the other is from Biodynamic vines (black label). 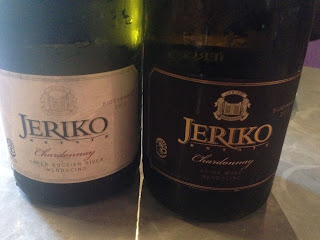 There were many restauranteurs and grocery and liquor store owners who came to the tasting. After reading Nora Pouillon's book My Organic Life, a memoir about starting the first certified organic restaurant in the country, last week, it was a surprise and a pleasure to meet chef Niko Eftimiou and general manager Fred from an organic Greek restaurant Pathos in Berkeley The stylish eatery opened this summer. It's is currently in the process of finding out if and how it can meet the requirements to become a certified organic restaurant.

Coming full circle - Ed Fields imports this Sofos white (below) as well as a Sofos red wine from Corinth, Greece that Pathos serves - thanks, in part, to the good folks at Mountain Peoples Wine Distributing, based in Nevada City, who hosted the tasting. 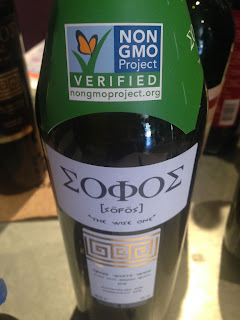 A label that's seeing a lot of steady growth is the Cal Naturale line of Chardonnay and Cabernet Sauvignon sold in tetrapaks (sold in 500 ML and one liter containers). The "go everywhere" organically grown wines are perfect for hikes and the beach. 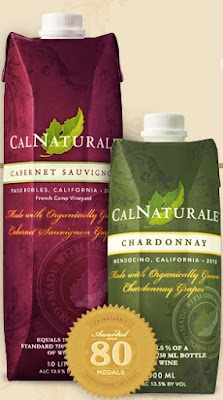 The winery sources the Chardonnay from Mendocino and the Cabernet from Paso Robles. Of course, the main selling point is that these are excellent wines - some of the best out-of-bottle experiences

For more information, or to see and hear Ed Fields in a special video, visit the Mountain Peoples Wine Distributing web site here.