Domaine Modesto: Is the Central Valley Starting a Race to the Bottom for Pinot? 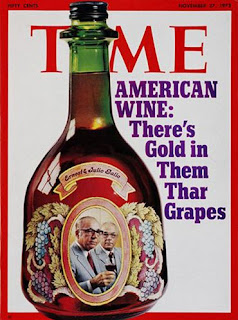 What? you say. Pinot Noir is a cool climate grape. It doesn't grow well in hot areas.

Just as Cabernet was something that used to come from Bordeaux, but, in America, it comes from Modesto.

And all hail the Hearty Burgundy - a wine that was not Pinot. And an enological nightmare, since "hearty" and Pinot Noir are words that should never go together. (You wonder why they didn't name it Hearty Italian? Or Old World Red?)

Should we expect these new Pinot Noirs from the Central Valley to be named "Delicate Burgundy"?

Though the Central Valley has only 14,000 acres of Pinot planted, its vines produce quantity at the expense of quality. Those vines yielded 63,000 tons of Pinot Noir, averaging $443 to $710 a ton.

Though the region has half the acreage of the coastal valleys, the hot climate area grew more tonnage than the cooler climate regions.

The other side of this story of 2015 Pinot harvests is that coastal growers had a down year in Pinot Noir production, due to poor fruit set, frost and drought.

The 2015 harvest in the North Coast was down 22 percent for Pinot; in the Central Coast Pinot was down 34 percent. The Russian River Valley was the worst hit, losing 45 percent of its crop compared to 2014.

Overall Plantings and Prices: Up Up Up for Pinot

In addition, Pinot is now the highest priced grape grown in California, as the chart below shows.

McGourty raised the concern that if too much poor quality Central Valley Pinot reaches consumers, other tiers of Pinot Noir producers could be affected, if the varietal was downgraded by a large influx of cheap Pinot Noir.

He and others point to Syrah and Merlot as examples where that has previously happened in California.

Jim Gordon has written an excellent piece capturing more of the details of McGourty's presentation; you can read it in Wines and Vines here.
Posted by Pam Strayer at 11:10 AM 1 comment: 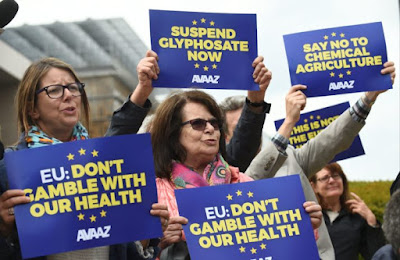 Don't miss Politico's coverage of the debate over glyphosate in the EU, where the weedkilling chemical's renewal license is stalled due to popular outrage over human health consequences. Read it here.
Posted by Pam Strayer at 10:19 AM No comments:

For Pinot fans, the most popular spot online to keep up with the varietal is the Prince of Pinot web site, run by Rusty Gaffney, a retired MD, who keynoted and moderated the Anderson Valley Pinot Noir Festival's technical conference in May.
Gaffney began the day with a presentation on the changes the valley's Pinot has undergone since he started covering the area in 2007. His remarks showed that Anderson Valley has become among the most highly respected terroirs for Pinot Noir in a short amount of time.

In the other prime Pinot regions in California, Pinot sells for $2,955 a ton in San Luis Obispo and Santa Barbara counties, and for $3,519 a ton in Sonoma County. 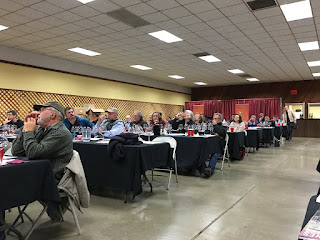 This puts Anderson Valley Pinot among the most expensive grown in California.

Overall, Anderson Valley has 91 vineyard properties which are owned by 71 farmers.

Gaffney said the average vineyard size is 27.5 acres. (Twenty six are less than five acres in size; three are greater than 100 acres). The median size is 11.5 acres.

Though the Alsatian varietals put the region on the map in an earlier era, their presence has dwindled over time as the region's love affair with Pinot has grown.

There are 30 bonded wineries in the area and 32 tasting rooms open to the public, including some by appointment only. In addition, another 50 wineries from outside the region source fruit from Anderson Valley, including Copain, La Crema, Lioco, Littorai, Long Meadow Ranch, and more.

1. They tend to have lower alcohol levels than comparable Pinots from other, warmer regions.
2. Because of the cool climate, Anderson Valley Pinot ripen slowly, ripening more slowly so that flavors unfold without high sugar levels, leading to bright acidity and fine wines.

One of the main distinctions that can be made within Anderson Valley Pinot Noirs are those grown on valley sites versus those grown on hillside sites. Valley floor Pinot Noir is from "soils that are deeper, lighter and more fruit driven," Gaffney said, versus rocky slope Pinots that yield wines that are "more structured, earthy, minerals in style."

How this translates into the wine, Gaffney observed, is that sites near Boonville yield Pinots with "lush red cherry fruit, rounder tannins, bigger textures and great acidity." Sites from the Western end of the Valley lead to "more earthy, spice, angular tannins and racy acidity," he stated.

Gaffney concluded his presentation with a quote from Dirk van der Niepoort, saying "While 'good' wines are 50 percent terroir and 50 percent winemaking, 'great' wines owe far more to terroir," the implication being that Anderson Valley has the terroir necessary to make great Pinot Noir.

As a side note, in terms of organic vineyard sites, there are just two that are certified. The total acreage now certified is 46 - or just under 2 percent of Anderson Valley vines.

That will increase to a total of 116 acres, when Long Meadow Ranch's transitional 86 acres of vines is completed (expected in 2017). (That would increase the total to 5 percent of Anderson Valley vines).

• Filigreen Farm is a valley floor site in Boonville.
• Handley's is a sloping hillside site in the Deep End (the western end of the valley).

In addition, two other sites are in transition to organic certification.

• Long Meadow Ranch's transitional site is a hillside site as well.
• Roederer has 26 acres of organic vines in transition with Stellar Certification Services; that number includes 17 acres which are in the process of moving towards Biodynamic certification.
Posted by Pam Strayer at 9:09 AM No comments:

Helen Chavez, the widow of Cesar Chavez, who supported her family's activist path in protecting farmworkers, died this week of natural causes. She was 88.

The Chavez family suggests making a donation to the UFW in lieu of flowers.

Pesticide use, in the era when organophosphates (no longer widely used in vineyards) were widely used in grape growing, led to the deaths of hundreds of farmworkers in California and to Cesar Chavez's decision to fast.

Today farmworkers in vineyards are still subject to many toxic substances, but often the harmful effects take a longer time to manifest than they once did when harsher chemicals were used. There are still health impacts despite improvements in worker safety.

For more on Helen Chavez's life, see this article on the UFK web site.
Posted by Pam Strayer at 6:20 PM No comments:

One of the biggest wine shows in the world, ProWein featured an organic lounge this year. Enjoy this view of the organic wine industry from a region where organically grown is much more popular.

Nearly nine percent of European wine production and consumption is from organic vines. In comparison, in the U.S. fewer than 3 percent of vines are organic.

The video includes a three minute interview with Olivier  Humbrecht, head of Domaine Zind-Humbrecht. Humbrecht was the first Frenchman to qualify as a Master of Wine. As vignerons, his family's history dates back to the 17th century. The estate has been organic and Biodynamic since 1997.


To read more about Humbrecht's view on Biodynamics, click here.

For more ProWein videos, click here.
Posted by Pam Strayer at 9:21 AM No comments:

Prince of Wales: Biodynamic Agriculture Is Part of the Solution

In case you missed it, Prince Charles came out in support of Biodynamic agriculture.

"...for more than half a century, industrial farming methods based on chemistry instead of biology have prevailed....decimating biodiversity..." and diminishing the health of the food we eat, he said.

"Healthy economies depend on healthy ecologies," he says.

Posted by Pam Strayer at 4:58 PM No comments: