Goodbye to the Old Terroir and Hello to the New Microbial Terroir?

I don't know if you read that fascinating article by Michael Pollan in the New York Times magazine earlier this year (Some of My Best Friends are Germs, May 15, 2013) but it made a big impact on me and a lot of other people. Subtitled, "Say Hello to the 100 Trillion Bacteria That Make Up Your Biome," the article details the revolution in scientific thinking about what plays a much bigger role in human health than we have known - bacteria.

As the former editor of DNA.com (a startup created by Netscape founder Jim Clark, with James Watson on the board) when genetics was health's new poster child, I am vastly relieved to see more and more emphasis on our current activities rather than on genetic destiny (of which there is very little, in terms of known diseases, a fact that the much touted 23andme.com ignored at its peril as it discovered this week when the FDA shut it down for unsubstantiated interpretations).

In his article, Pollan writes:

Justin Sonnenburg, a microbiologist at Stanford, suggests that we would do well to begin regarding the human body as “an elaborate vessel optimized for the growth and spread of our microbial inhabitants.” This humbling new way of thinking about the self has large implications for human and microbial health, which turn out to be inextricably linked.

One of the stranger immediate applications of the new "Our Biome R Us" thinking is fecal transplants that may help the obese, who have a hard time losing weight, by introducing bacteria into their biomes from skinny humans. (Read the New York Times article Gut Bacteria From Thin Humans Can Slim Mice Down to learn the details; I won't repeat them all here).

Not that anyone's forgetting about genetic manipulations - just look at those engaged in the brave new world effort of bringing back extinct species. But it's good to see bacteria getting more of their just desserts - they haven't gotten enough respect. The amount of time needed to conduct research studies on fast acting bacteria is much more attractive than the amount of time needed to establish genetic linkages, establish tests and apply preventive measures.

When it comes to bacterial interventions, as go the humans, so goes the wine world. New thinking is coming forward about the implications of the role of microbes in wine taste and how it might be used as a new tool in the winemaker's arsenal.

New research published this week from U.C. Davis says wine terroir is partly a function of the microbial life of grapes who share similarities and differences in bacteria regionally or even from vine to vine in the same vineyards.

As any good Biodynamic® winemaker can tell you, native yeasts ain't all the same. They act differently and give different qualities to wine. (Most wine is made with commercial yeast which introduces a whole other factor to the winemaking equation.)

The U.C. study has tremendous implications.

“The study results represent a real paradigm shift in our understanding of grape and wine production, as well as other food and agricultural systems in which microbial communities impact the qualities of the fresh or processed products,” said Professor David Mills, a microbiologist in the Department of Viticulture and Enology and Department of Food Science and Technology.


One big question is: will wineries attempt to do the equivalent of a fecal transplant on vineyards - i.e. importing microbes from the world's best known vineyards?

I'll be interviewing one of the intrepid U.C. Davis researchers this coming week and will let you know what they say about these and other topics.
Posted by Pam Strayer at 9:07 PM No comments: Links to this post

If you can't make it to the Napa Valley Film Festival, you might want to indulge your film longings with this enchanting documentary about life in France's Pinot Noir and Chardonnay heartland - Burgundy.

The film is called A Year in Burgundy. Here's the trailer.

Don't miss the wonderful quote from Lalou Bize-Leroy, the noted Burgundian grande dame, whose family owns Domaine de la Romanee-Conti. She established her own Domaine Leroy with all biodynamic vines, which prospered while her neighbors withered with mildew in the wet 2007 and 2008 seasons.

The film is made by David Kennard (with whom I used to work when I made PBS documentaries for a living.)

The film is available on iTunes, Amazon and on DVD.
Posted by Pam Strayer at 2:33 PM No comments: Links to this post 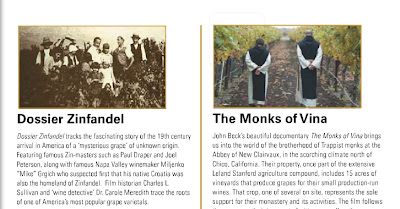 From the Croatian TV, and the folks who made the film Like the Old Vine about Mike Grgich last year, comes a second film - on the history of Zinfandel. It screens twice:

The Monks of Vina

John Beck's new documentary on the historic Vina winery will show. Having just purchased one of the few remaining new copies of the one and only book on Vina ($125!) this month and having visited Vina for the first time in Sept., I am very much looking forward to seeing this film on a piece of wine history people don't really remember.


The Monks of Vina from Beck Media Productions on Vimeo.

Posted by Pam Strayer at 4:32 PM No comments: Links to this post