In 2016, winemakers divided the year into two eras: pre Cash Investigation and post Cash Investigation, after the French TV show did a 90 min. special on pesticides and health, especially children's health, that aired nationally. The show is the equivalent of the U.S. program 60 Minutes.

It galvanized the nation against the use of pesticides, especially near schools, and started a national debate that has led to the country's political leaders vowing to end the use of glyphosate.

Well, Cash Investigation is back again here in 2018 with a new show on pesticides - and you can watch it in its entirety here. (It is in French, but you can probably understand a lot of the story.) The video above is a snippet from the production; see the whole 90 minutes below.

Would that we had such reporting in the U.S.

Posted by Pam Strayer at 7:24 PM No comments:

Montinore has just debuted a sparkling, sweet white wine, handcrafted from its Alsatian varietals. Named Vivace, Montinore released it on Saturday, selling it online and in its tasting room.

It's an Oregon original - sourced from white Alsatian varietals, grown on Montinore's 80 acres of Gewürztraminer, Muller Thurgau, Pinot Gris and Riesling. (The winery's other 120+ acres are devoted to Pinot Noir.)

Montinore made 2,000 cases of this inaugural vintage. Vivace is made via the charmat method, in which CO2 is injected into the wine. (This is how most Proseccos are made, and it's the reason why Prosecco is much more affordable than Champagne.)

Montinore also has plans for another sparkling wine - one made via the traditional method - which will be released in 2019. 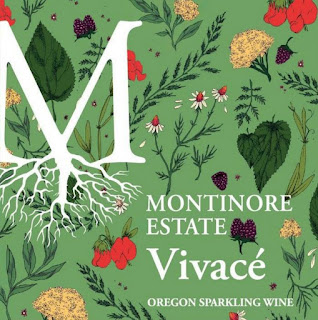 Vivace is Demeter certified as "Made with Biodynamic Grapes," which means no pesticides, insecticides, herbicides or fungicides (save sulphur, which is approved for organic and Biodynamic farming) are used on the vineyards. It also means the vines' immune systems and health were aided by herbal teas made with anything from chamomile to yarrow along with the obligatory silica spray.

In the winery, the maximum allowable level of sulfites for this type of Demeter certified wine is 100 ppm.

Montinore is the biggest producer of Demeter certified wine in the U.S., making 40,000 cases a year. Its largest production wine - the Montinore Red Cap Pinot Noir - is regularly listed by Eric Asimov (the NYTimes wine critic) in his 20 Under $20 articles.

Montinore makes about 20% of all the wines from Biodynamic vines in the U.S. And unlike many other Biodynamic producers, it is (almost) 100% estate and nearly 100% Biodynamic. (The founder, Rudy Marchesi, has a small Italian wine passion project - making a few wines from Italian varietals he doesn't grow - as an homage to his Italian heritage).

Inside the glass: citrus notes on the nose - lemon, lime and orange blossom, with a touch of ginger - and apple, melon and citrus on the palate.
Posted by Pam Strayer at 11:31 PM No comments:

You've heard about predatory birds being used in vineyards before. Owl boxes are commonly placed in vineyards to control gophers and other rodents. Hawks are also effective. Bluebirds have been used to go after the blue-green sharpshooter, which brings the dreaded Pierce's disease.

But to my knowledge, no one - except one guy in Dry Creek Valley - has their own Peregrine falcon. 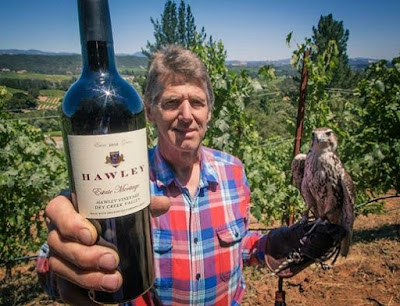 John Hawley, a legendary California wine pioneer who put Sonoma on the map at Clos du Bois in the 1970's and brought Kendall Jackson's from the table wine era to the fine wine era, has been a falconer since his childhood years, growing up in Mill Valley. 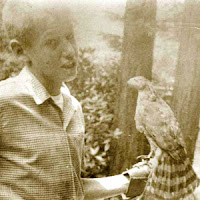 He got into winemaking early on and spent his first year as a winemaker at Preston in Dry Creek, before his career took off into the stratosphere at Clos du Bois and KJ, where he was the head of winemaking, making millions of cases a year and upgrading the winery to oak barrels. (Imagine that era!)
Today his sons run the family winery (amping up its social media and video, too), leaving him freer to his falconry on his (organic) Dry Creek Valley estate.

John's new, two month old Peregrine "baby" is named Max. Hear John's talk about his new falcon and how Max will be trained.

And while you may enjoy  the falconry aspect of Hawley's story, don't forget about the wine!

I was initially surprised to think of a great estate Cabernet coming from Dry Creek Valley, which we more often associate with that California classic Zinfandel.

Yet the hills in nearby Alexander Valley is known as Cab country. The Hawley's site is located on the west side of the valley, near Bradford Mountain, a highly coveted site. 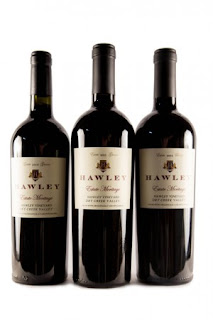 The 10 acres of vines are mostly planted to Bordeaux varietals - Cabernet, Merlot, Cab Franc - along with smaller amounts of Zin, Petite Sirah and a tiny bit of Viognier. The vineyard was certified organic in 2006. About half of their 3,000 case production comes from their organic estate grapes. They are one of the few in Sonoma to label their wines "Made with Organic Grapes" on the bottle.

Hawley is best known for classic Bordeaux blends. My personal favorite (along with many others) is their 2010-2012 Meritage, which is still sold in a vertical three pack ($180). I bought some of the last bottles of their earlier coveted Merlots and a 2011 Meritage when I visited a few years ago (bottles I'm longingly eyeing, but adamantly aging).

Most people visit Hawley's tasting room in downtown Healdsburg (near SHED), but the better choice by far is to take the vineyard tour.

For $25, you will have an unforgettable experience up on the hillside estate site. Upgrade to their lunch package for a memorable picnic and tour ($46).

If you're lucky, your vineyard tour could include the sight of a young Peregrine falcon. But at the very least, you're likely to see hawks soaring over the mountain and enjoy the valley views from the barn/winery.

So if you're looking for a great outing this summer, or hosting visiting summer guests, get away from the cars and the crowds, and go to a hotspot for great, under the radar Cabs from a master craftsman and his sons. This is the real Sonoma.
Posted by Pam Strayer at 10:48 AM No comments:

A New Type of Wine Score - Glyphosate Levels - Tells You What's in the Bottle - California's Wine Institute Says "No Problem"? 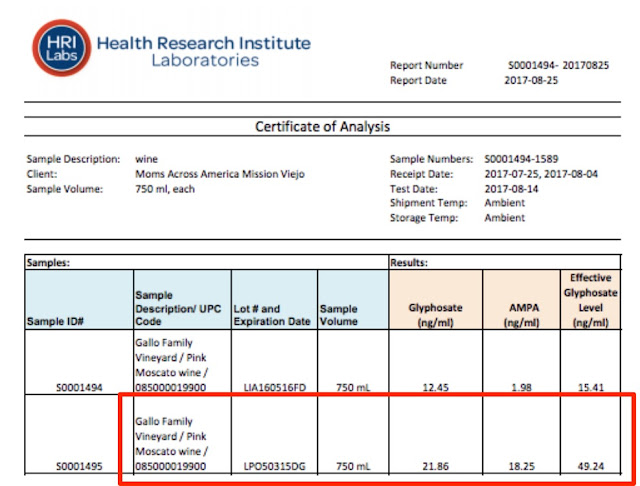 The highest and lowest results?

Question: why did the Wine Institute buy the search terms for a search of "Moms Across America glyphosate" and publish this page? 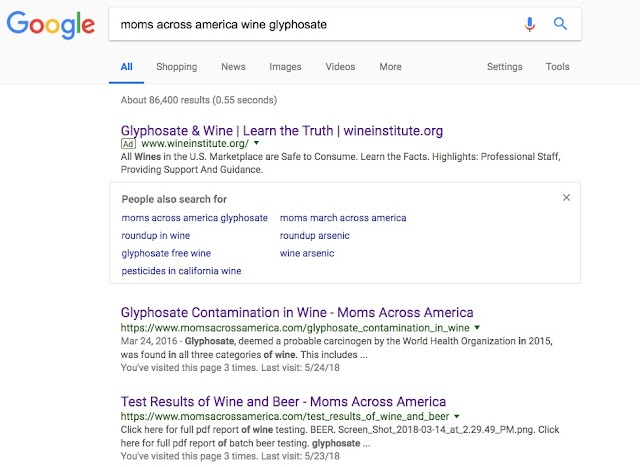 • Glyphosate is legally classified as a carcinogen in the state of California.

• The World Health Organization's IARC - a blue ribbon panel of non partisan scientists (who are not regulators) - found glyphosate to be a probable carcinogen in 2015. And these scientists included some of the most prominent, former senior U.S. health officials.

• Almost all of the entities who have approved glyphosate (US EPA, EFSA, etc.) are regulators, many of whom have been shown to have been lobbied by Monsanto. (Regulators are very different from scientific panels, as any scientist will tell you.)

BEN AND JERRY'S - A MODEL FOR CHANGE

When it was found - through testing - that Ben and Jerry's ice cream had glyphosate, Ben and Jerry's took immediate steps to try to change the way it sourced ingredients.

How long will it take the Wine Institute to see there is a problem and take action based on the latest peer reviewed science?

The problem in the wine industry is that they are not taking this issue seriously enough. A growing number of consumers do.

Moms Across America, just one of the groups bringing this to the attention of American consumers, has more than 1.5 million Facebook page views each month. And there are many groups with a lot of social media power broadcasting similar messages.

Companies - including vintners - that want to position themselves for growth need to start paying more attention and planning to launch glyphosate free products.

Siding with Monsanto and its dangerous herbicide is not a forward thinking path.
Posted by Pam Strayer at 11:26 AM No comments: