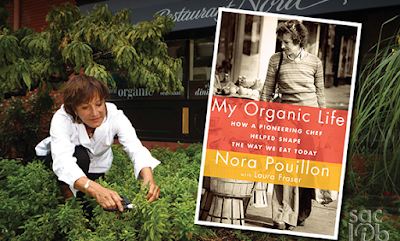 Remember when Wonder Bread was the only option in the supermarket aisle? Or when organic food was something you had to go to a health food store to find - and the produce was all wilted? Well, you may not be old enough to remember, but Nora Pouillon does. For this Austrian girl, life in America, when she arrived in her early 20's with her new French husband, was a food nightmare.

Raised on fresh country food on a farm outside Vienna during World War II, Pouillon, now 70, presents a picture of the healthy life - pure food, grown and processed on the farm (and how much work it was to create that food).

Pouillon's new memoir takes readers on a journey through the farm and onwards into her post war cosmopolitan life in Vienna and onto her new life as a housewife in D.C. Over time, her passion for cooking for friends becomes a profession. She started by teaching cooking classes in her home kitchen. Slowly she finds herself running a small restaurant and then her own restaurant. It was a hangout for Washington Post writers during the Watergate era, and around the corner from Ben Bradlee's house; he was a fan.

Later she goes on to launch her own gourmet restaurant. James Beard visited. The Clintons came often. And for Michelle Obama's birthday, she and the President came for a private dinner.

All along the way, Nora has challenges and adventures. The biggest one is her search to find organic producers and to nurture and support the growing organic food system. She writes of driving around the countryside in Pennsylvania, Virginia and Maryland, looking for farmers who grew or would grow the kinds of organic foods she wanted. One of her most humorous stories is buying beef, in a clandestine way, in a parking lot in Maryland, by pre-arrangement. A group of housewives all arrive in station wagons, buy the meat from a farmer from another state, and scurry off. Like a drug deal. What people had to do to get clean meat back then.

Her outsider story is a great reminder of the post war industrial food culture that America has been trying to recover from ever since it took root when the pesticide companies sought profits from food not war. By making war on insects, food - and wine - have suffered. So have our ecosystems. (Is it a case of throwing the baby out with the bathwater?)

Nora is charming. And she is a true champion of the organic food movement, establishing local farmers markets and helping new food and environmental organizations promote the organic cause, including Chefs Action Network (CAN). Restaurant Nora became the first restaurant in the country to be certified organic (by Oregon Tilth).  (Very few restaurants have followed suit.)

Pouillon and the certifier collaborated with an attorney on writing the regulations to establish the certification requirements which were later adopted and approved by the USDA. The standards stipulate that 95% of the ingredients used must be organic. That 5 percent leaves room for wild foods - mushroom, fish - which cannot be certified organic.

Buy the book. Give the book to friends. (It's very readable.) And watch this video (recorded by the Aspen Institute).

One of the most surprising moments to me in the video was hearing her talk about other chefs and why they don't serve more organic food. It's both eye-opening and sad.

Her final word? Consumers have to insist that organic is what they want.

P. S. One caveat: re the video...there's a discussion about buying food from non certified farmers. I will just say - I don't think you can "look someone in the eyes" at the farmers market and have them tell you the truth about how the food was grown.

I have been taken on vineyard tours at some famous places and been told over and over how the vineyard was completely organic - no herbicides were used.

One winery even had a giant banner on their web site saying they were organic. After a personal tour at their place - given by the owner -, I went home and read their pesticide use report (luckily we have this requirement in California) and found that the very same vineyard reported using many applications of (non-organic) pesticides and fungicides. Is there a communications disconnect between the owner and the vineyard manager? An assumption that no one will read the pesticide use report? Denial over the fact that you are not organic? Who knows...

Today that winery has taken down the organic banner (at the request of state officials who are charged with enforcing the use of the word "organic," which is restricted, by federal law, for use only by those who are certified) and now features a giant banner that says "Natural" and in smaller print "Native and Untouched." Right.

Another winery tells people they don't use pesticides and herbicides - but omits the fact (which you can see if you read their pesticide use report, available from the county ag commissioner) that they do use fungicides. So, my feeling now is that I don't want to read everyone's pesticide use report. Inspection is best left to the professionals - organic certifiers.

I am also very tired of people saying organic certification is expensive. Yes, there's paperwork, but there's also paperwork and inspections for being certified "natural" or "sustainable" and you don't hear many people complain about that nor the fees they have to pay to participate in those programs.

As for the expense of organic certification fees, the costs are so minimal that people are often surprised by how cheap it is.

For instance, for the average wine grape grower, it's around $7 an acre for certification fees.

Buy the book, and enjoy reading it - maybe with a nice glass of your favorite (organically grown) wine.
Posted by Pam Strayer at 8:32 AM