The Pilgrims: Roots of a Cautionary Tale?

Last night I watched the wonderful two hour PBS special The Pilgrims, which tells the story of the religious separatists who settled, however unexpectedly in Plimoth (earlier the Wampanoag village of Pawtuxet). They had originally been bound for Manhattan. It was just one of the many surprises of their journey.

The story of these settlers and how they came to be identified in the American consciousness as the national origin myth (which happened only on the verge of the Civil War, after colony governor Willam Bradford's history of the colony surfaced after a 70 year absence) isn't one that was taught in schools when I was growing up.

The program is a slow unfolding of who the Pilgrims were, in England and in Holland, before they left Europe, and who they became after they set forth on their perilous journey.

It's a tale that has more than a few similarities to the more famous survivalist story of modern times - that of the famous ship The Endurance.

More than half of the colonial settlers died, many of them on the ship, which became a deathbed for them, or a living hell, depending on whether you lived or died.

The great strength and pleasure in watching this two hour special is the telling of the tale from the point of view of a new generation of historians, including a few who are Wampanoag, who lift the veil of sentimentalism and patriotism to show the Pilgrims for who they really were - a complex and shifting community over time.

But the main point of the Pilgrims' journey, in the eyes of those who financed their trip to America, was to bring home the bacon - or the beaver fur - i.e. to extract the wealth from natural resources and send it on a ship back to England where the goods could be sold.


So instead of a purely religious pilgrimage, the Pilgrims were the first in a long line of settlers to be beholden to the financial interests of the merchant class and financiers and one of many colonial settlements who struggled to extract something of "value" - other than corn to live on - from the land.

As an Ecologist article states, "In the last 50 years, a staggering 140 million hectares (325 million acres) - the size of almost all the farmland in India - has been taken over by four industrial crops: Soya bean, oil palm, rapeseed and sugar cane. And this trend is accelerating..."

This is much the story of modern wine, in America, where in California alone, 615,000 acres in California are planted to grape vines, the vast majority of which go into mass produced, industrial wine (even many grapes from Sonoma and Mendocino) - extracting "value" from the land. Each year the number of chemically farmed vineyard acres increases - along with the amount of toxics in the form of fungicides, herbicides, insecticides and fertilizers.

Whether the wines are "value wines" or fine wine destined for collectors' cellars, almost all wine in California and the U.S. has one thing in common - the application of glyphosate or Roundup. Close to 500,000 pounds - yes, pounds - are applied on bearing California vineyards each year. While most scientists would categorize Roundup as a carcinogen, despite Monsanto's protests, no one doubts that it kills micro organisms in the soil.

There is one group that is an exception to the toxic farming system - growers who are organic.

Their care for the land contrasts with the way modern farmers - the Pilgrims' offspring, and the offspring of other immigrants who settled here later - have treated the soil. Their neglect of soil health caused them to move from the exhausted soils of the Southeast and the Eastern seaboard to the West. Until there was no more land. (Or water).

For more on the story of soils as a moving force in American history, see this week's NOVA series on PBS. The episode Making North America: Human features a segment with David Montgomery, soil historian and MacArthur fellow, showing how Virginia's tobacco growers depleted their native soils, which encouraged and led to Western expansion.

(If you haven't yet read David's book Dirt: The Erosion of Civilizations, check it out. It's a fascinating read and also available as an audiobook. You can also see him give an hour talk on it here.)

For those who are interested in exploring David's latest work, check out The Hidden Half of Nature: The Microbial Roots of Life and Health. Publishers Weekly gave it a glowing review as did Kirkus. (I just ordered it). It focuses on yet another aspect of why soil health is so important.

And for a deeper dive into soil health, see Symphony of the Soil (available as a DVD or on Vimeo on Demand, too) which features David and a wealth of other experts on this topic.

So soil - it's the root of all society. The Pilgrims survived only because a native American helped them plant corn - in good soil. The Virginian colonies survived only as long as their soil was in good shape.

Today, one might ask: how long will consumers continue, unwittingly, to support the chemical vineyard system that "extracts value" by growing wine grapes with chemical fertilizers and application of toxics? Many are indebted to financiers - via bank loans - and Big Wine, the four companies that control most "value wine" in the U.S. and are focused on expanding into higher priced labels. Are we, like the Virginian tobacco growers, unknowingly contributing to soil suicide?

So this year, once again, I am thankful for the organic growers in our land and for the care and respect with which they treat soil, one of our most precious substances.

I'm celebrating the dedicated growers who give us wine worthy of praise - and a great deal of pleasure. Happy Thanksgiving.
Posted by Pam Strayer at 9:57 AM No comments:

Few people understand why one looks for the certified organic vineyards as part of the search for the best in wine...but for those of us who understand what that means (i.e. that far less toxic substances are used in farming, soil retains its vital and alive health and dynamism, and the wines are more expressive of their unique terroir), it's so lovely to find wines that are worthy of the journey to discover them.

Or, you can have your cake and eat it, too.

At least that's how I felt during lunch time today, when I went to Terra Gallery in SF to taste through wines from three organic or Biodynamic producers (out of 50-60 wineries) from the region. Each is a Grand Cru classé estate.

It's also a reminder that fine wine doesn't have to cost as much as it does in California. The wines featured here sell in the $30-50 range - and are truly world class.

One should say much more about these wines than the facts about their farming certifications, and they deserve that. But mostly, when it comes to wine, the best way to understand them is to drink them. Like Eric Asimov says, tasting notes are as dull as describing music through its frequencies - technobabble applied to something that really is not about words. Instead, it's about sensations - which is what we love about wine, music and other sensory experiences. So let's just say, you will be rewarded by trying these wines...they are worthy of your attention. 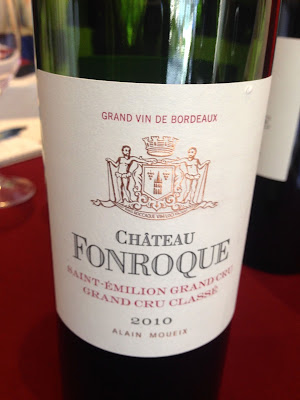 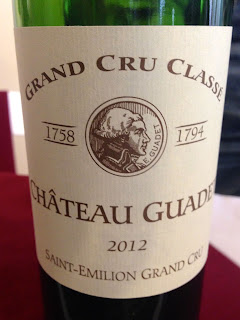 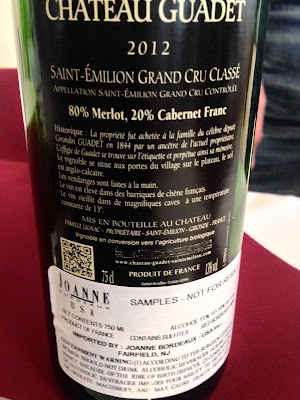