Not many people know it, but Heitz Cellars has (quietly) been one of the top most organic vineyard owners in Napa, growing its organic acreage slowly over decades.

Its long time vineyard management consultant, Mark Neal, has gradually shifted all of the winery's 425 acres to organic certification. Now the number will increase to 476 acres.

Under the new ownership of Gaylon and Lisa Lawrence, Heitz has now purchased the 51 acre Wildwood Vineyard, adjacent to its own Trailside Vineyard in Rutherford. (The price was reportedly $25 million, or about $500,000 an acre.)

UPDATE (posted July 10)
The new president of Heitz, Carlton McCoy, Jr., announced that the winery intends to convert all of its vineyards to Demeter certified biodynamic farming, among other changes planned for the brand.

Read more:
https://grapecollective.com/articles/news-flash-heitz-will-split-itself-to-return-to-its-vineyard-roots
Posted by Pam Strayer at 8:54 AM No comments:

Your Tax Dollars At Work: UC Davis Professor Dr. Carl Winters of UCCE Shares Song "I Sprayed It On a Grapevine" with Sonoma Growers at DPR Accredited Educational Event--"No Problems with Glyphosate"

In what some would say is a surprising display of tastelessness and scientific inaccuracy, UCCE staffer and UC Davis Professor Dr. Carl Winter this week demonstrated just how blasé the wine industry is about safety issues when it comes to Roundup herbicide and its listed ingredient glyphosate. 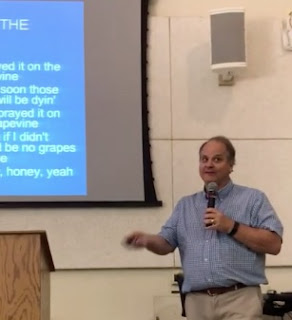 "He said there is no definite science to indicate carcinogenicity of glyphosate," Warwick reported.

Winter earned his Ph.D. at U.C. Davis in agricultural and environmental chemistry, not medicine. 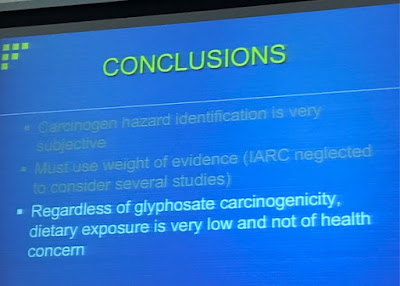 His remarks come after three jury trials (one federal and two state) have found Monsanto at fault for not warning of the dangers of using the herbicide. Juries found Roundup use played a role in the plaintiffs contracting non Hodgkin's lymphoma.

More than 13,000 more lawsuits are pending and Bayer's stock has fallen by nearly 50% since the trials began. These plaintiffs' exposure came from applying the product. They say they were not sufficiently warned in advance of its potential hazards.

Some of the authorities testifying in favor of the plaintiffs about the herbicide's toxicity include former heads of the U.S. government agencies overseeing federal toxicology standards.

• Dr. Charles William Jameson, an animal toxicology expert who was formerly with the National Cancer Institute and the National Institutes of Health

Warwick photographed slides from Winter's presentation and reports that during the event he told the group that dietary intake of glyphosate did not pose any danger. See the slides he presented to the growers group below. His slides focus on dietary intake and use data from 2015-2016. 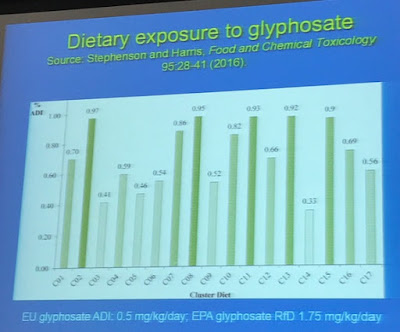 He did not cite more recent research from:

• Dr. Michael Antoniou of University College in London, documenting that levels as low as 2 ppb of glyphosate lead to an increase in fatty liver disease

It is true that the Monsanto trials did not include exposure from dietary sources leading to NHL. But there is scientific evidence connecting dietary exposure to a variety of human health impacts, as the latest UCSD study shows. 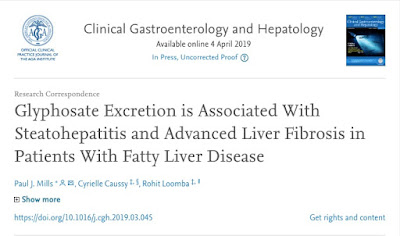 For a slide deck from Dr. Mills on this topic, click here.  Dr. Mills is Professor of Family Medicine and Public Health and Director of the Center for Excellence for Research and Training in Integrative Health at U.C. San Diego.

Winter also did not address the issue of the toxicity of the unlisted ingredients in Roundup raised by Antoniou or of those clearly documented by French researcher Gilles Seralini, of the University of Caen.

Warwick says Winter dismissed IARC's findings of glyphosate as a probable carcinogen because the IARC scientists gave weight in their assessment to independent (i..e non-industry) studies and excluded known Monsanto-funded study data. (This is noted in his slides). This point as been Monsanto's party line and has been discredited in many news reports and in the trials. 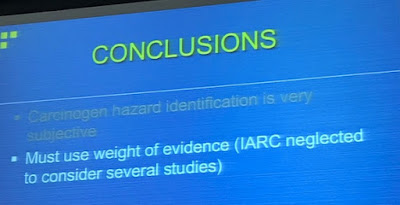 IARC committee members have said that is IARC's regular policy; it uses only data from independent sources, not from industry sources.

"It's a big problem to remove glyphosate from IPM plans," Winter said, according to Warwick.

The Department of Pesticide Regulation granted attendees an hour of continuing education credit for attending the event.

Meanwhile over at the ASEV meeting in Napa, wine industry professionals intent on finding alternatives to Roundup were listening to a lecture from Kenneth Olejar, a research fellow from Lincoln University in New Zealand, on the use of textile mats as weed mats, a promising method of weed control in vineyards.

But in Sonoma, Winters tried to lead the group in song, using the tune from, "I Heard It from the Grapevine" in his rendition of "I Sprayed It On a Grapevine."

Here's Winters performing the song, in video, recorded June 21 (see video above). (As one astute reader noted the song is about an insecticide, not an herbicide, which was supposed to be the subject of the presentation.)

You can see slides from his Winters' presentation here.

I bet you're wondering how I knew
About those bugs' plan to make me blue
The holes in the leaves. They make it clear
That there are invertebrates to fear
It took me by surprise I must say
But this insecticide will save the day so...

You know I'd prefer not to spray
But those bugs I've got to keep away
IPM has clearly got a role
And I'm all for biocontrol
But sometimes the sprays work the best
And put my worst fears to rest.
That's why

Yes. I'm aware of consumer fear
But the residues will disappear
I understand the environmental view
And worker safety is important, too
But I followed all the rules
And it's one of my best tools...

Postscript: Bolding is mine.

Note:
• I have contacted both DPR and UCDavis for comment and will post their comments here.
• According to one source, Friday is Winter's last day before retiring - at taxpayer expense!

We have demonstrated that glyphosate is present in non organic wines (Seralini & Douzelet, Food Nutrition Journal, 2018) by contrast to organic ones, and it changes their tastes.

The rats from my lab which received Roundup containing 0.04 microgr/kg (around 10,000 times more than indicated on the slides here) had not only liver disease (my collab with Antoniou, the photographs of the livre in my paper from 2014) but also kidney lethal insufficiencies and mammary tumors. This was due to the omnipresent glyphosate formulants now identified.

This is why the presentation above is ignorant.

Thanks for bringing this to our attention.

DPR’s process for reviewing and approving continuing education (CE) applications consists of a CE review committee that meets twice a week to review course agendas and content submitted by the course sponsor. The course content submitted is reviewed by at least two program staff including environmental scientists and management to ensure the content meets the requirements in regulation for approval which state in part…

“The instruction must focus on pest management and pesticides including topics as specified in the Food and Agricultural Code section 11502.5 (plant health, organic and sustainable practices, water and air monitoring and residue mitigation, maximum residue levels, quarantine practices, and the on-farm storage of fumigants….. “

For this specific course in question, the application and agenda was submitted with the information on main topics to be discussed. It was not made clear that the  staff would sing a song or claim there is no danger. In fact the title of  Dr. Winter’s presentation was "Glyphosate- a roundup of risks, regulations and reactions."

We appreciate you bringing this to our attention and will discuss the matter with the course sponsor, as well as, watch for and maintain an awareness of any other future problematic courses where opinions on pesticides will be discussed. 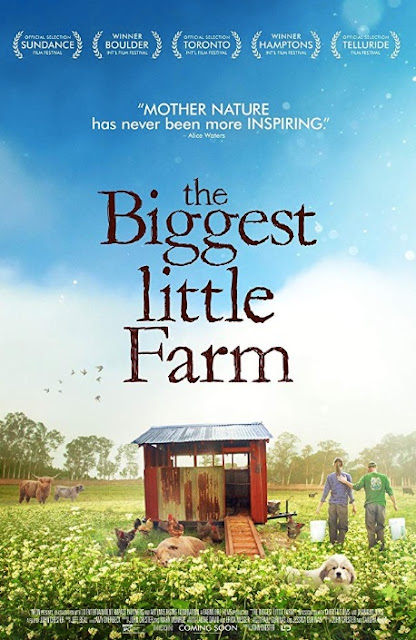 If you've recently seen the utterly charming feature doc The Biggest Little Farm (and you should see it if you haven't - definitely the feel good movie of the year), you may be asking yourself, "Are there any wineries that grow wine grapes this way?"

You can read about the U.S. and a few foreign biodynamic producers in the program guide from the first International Biodynamic Wine Conference which took place last year.

Here's the link.
Posted by Pam Strayer at 6:29 PM No comments: 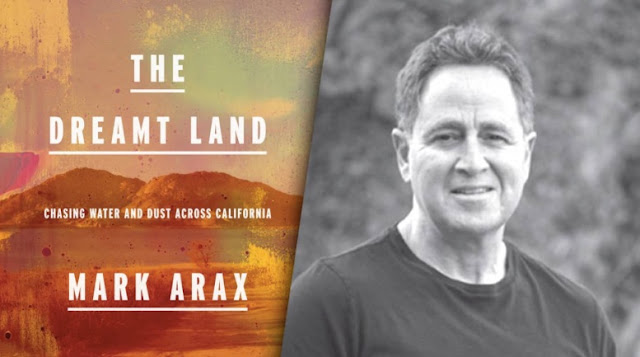 Mark Arax's new book The Dreant Land looks to be the Big Summer Book on my reading list. It hasn't arrived yet, but I saw a video interview with the author on Manny's Facebook page here that inspired me to take the plunge and buy the book:

You can read an excerpt on the publisher's website.

I also got the audio version of the book, read by Arax and though I have only briefly dipped in so far,  it's always a pleasure when the author reads their own work.

The book is part memoir, part straight nonfiction. It weighs 2.2 pounds. It's got great reviews and was sold out at the local bookstore. And, at 556 pages, it ought to last me awhile.

Although it's about all the growers (oranges, almonds, wine grapes, table grapes, etc.) in the Central Valley, wine grapes do play a role.
Posted by Pam Strayer at 7:15 PM No comments: