Mendocino's annual wine competition is the little competition that could - a regional tasting that has persisted for 37 continuous years, providing a spotlight for wines from "America's greenest wine region," as the area vintners like to promote themselves. County wide, organic vines occupy 25% of the vineyard acreage, and in one AVA, Redwood Valley, the number is as high as 35%.

While most of these grapes are going into America's biggest organically grown wine brand - Bonterra (and the second biggest - the no added sulfite wine producer Frey Vineyards) - some of the grapes also go into independent winery labels. Outside of Anderson Valley, most of these wineries belong to growers who also have their own brands (Barra, Blue Quail, McFadden and more).

Unfortunately most of the big Pinot Noir producers identify more as "Anderson Valley," than "Mendocino" and hence do not participate in the competition, even though this year the awards dinner and event were held in Boonville.

The Anderson bunch are often run and managed by out of county owners. (They do, however, participate in their own Pinot Noir event, held annually in Boonville in May.) But many big name, highly recognized brands (Littorai, Copain, etc.) depend on these Anderson Valley Pinot vineyards.

To my knowledge, only three vineyards in Anderson Valley are certified organic. Handley Cellars makes 3+ wines each year from organic estate vines. Drew Family (in the Mendocino Ridge AVA) has certified vines and will release its first vintage from them soon. Filigreen Farm, which is certified Biodynamic, sells grapes to vintners (and does not make any wine itself).

Since the Anderson Valley-ites don't all participate in the competition, their wines are underrepresented.

However, two Anderson Valley mainstays, with a long history in Mendocino, Navarro (not organic) and Handley (partially organic), are reliable participants, entering wines in the competition each year. In the most double gold medals category, Handley topped the overall list with three double golds (including one from organic estate vines) and Navarro (non organic) and McFadden Vineyards (organic) each had two. (Navarro, while refraining from using pesticides and herbicides, is not organic, because they use fungicides.)

Sadly, it does not appear that Campovida, one of my favorite tiny wineries, in Hopland, entered the competition. It's best known for its stellar Grenache.

Looking at the list of entries, I discovered a few wineries new to me that produce single vineyard designate wines from two great biodynamic vineyards - Graft Wines (a Grenache from Dark Horse Ranch, in Hopland - also the source for Campovida's Grenache) and Panthea (a Pinot Noir and a Pinot Gris from Filigreen Farms, in Anderson Valley).

Here are the competition results: 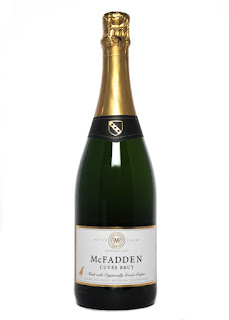 As anyone who is a regular reader of this blog knows, this is a wine whose horn I have tooted for many years - with good reason. (I've bought and enjoyed more at least 10 cases of it over the years).

If it were French and from Champagne, it would be called grower Champagne.

Get over the McFadden name - Guinness McFadden, the grower and vintner, is of Irish heritage - but the grapes are pure Potter Valley, a cooler climate region near Mendocino's border with Lake County, that somehow was overlooked when the French Champagne houses (Roederer, Domaine Chandon, and Taittinger) came a calling in America in search of good places to grow Chardonnay and Pinot Noir. Potter Valley is kind of a secret little spot. (Alice Waters' favorite supplier of grass fed cattle and lambs  - Magruder Ranch - is also in Potter Valley. Magruder meat is now available to mere mortals, by shopping at select Bay Area butchers. See the Magruder web site for details.)

In comparison, both of the big name brands in sparkling wine in Mendo - Roederer Estate (owned by a French Champagne house) and Scharffenberger - got silver medals.

McFadden's a local institution for its 45 years of organic farming near the headwaters of the Russian River and supplies many a high priced Napa wine with the grapes inside (including Chateau Montelena's Riesling) - and it won other awards in the competition (read on).

Credit is also due to Rack and Riddle, which makes McFadden's sparkling wines.

What's interesting to me in the Gold category is that tiny Barra (a 5,000 case brand), sourcing from its own vines alone, can make a wine rated as highly at Bonterra (a 350,000 case brand).

Most of the wines, regardless of price, wound up with silver medals.

Chardonnay 2013
Chardonnay 2014
Gewurztraminer
Grenache
Muscat Canelli
Pinot Noir - 2012
Pinot Noir - 2013
Red Blend
Riesling
Rosé
Sauvignon Blanc
Zinfandel
* A crazy thing: The Blue Quail brand is identical to the McFadden. It's the same wine with a different label. Blue Quail is the East Coast name for this Mendocino label. So while the Blue Quail Pinot got a double gold, the McFadden Pinot got a silver. (Who judged this?)
Posted by Pam Strayer at 9:31 AM