Pinot in the (Windy) City - San Francisco, That Is

The vintners of Willamette Valley staged a trade tasting today - mainly Pinot Noir with a side of Pinot Gris, and a touch of Riesling - showing off their 2012, 2013 and 2014 Burgundian reds and Alsatian whites at the Golden Gate Club in San Francisco.

California Pinot producers are rarely organic or biodynamic (Ampelos, Benziger, Calera, Porter Creek and a few others are the exceptions)  but Oregonians, given their Burgundian focus, have taken more cues from their French counterparts. A number of the best French Pinot Noir producers farm organically or biodynamically and, in an effort to make the best wine possible, many Oregonians do, too. The Oregonians also get certified.

Oregon has just 20,000 acres of vineyards, but the Willamette Valley, its largest wine producing region, has more than 800+ acres of certified vines, most of which is biodynamically farmed Pinot Noir.

No other region - not even Napa, Sonoma or Mendocino - has such a wealth of biodynamic vines.

Oregon not only has the fine wines covered - it also has table wine priced Pinots ($20-25). When people are looking for value, I recommend some of my favorites from Oregon.

2012 was a stellar vintage in Oregon for Pinots, and at Wednesday's tasting each of the wineries offered three wines (plus a library wine) to try. Though the emphasis was on selling larger production wines, there were plenty of special single vineyard or estate wines to sample, too.

At this tasting, Sokol Blosser poured two contrasting estate wines: the 2012 Orchard Block Pinot ($70), a beautiful, light, translucent Pinot ("more feminine") and the 2012 Big Tree Pinot Noir ($70), at the other end of the Pinot Richter scale. The latter was far more intense, on the "masculine" side of Pinot's range, and suitable for aging.

Boutique, Under the Radar and Worth Getting to Know

You'd have to be a bit of an Oregon Pinot geek to know Thistle Wines. It's one of those Oregon wineries that Oregonians keep to themselves.

The Jennison family has 27 acres of vines in the Dundee Hills (that's the Beverly Hills of Oregon Pinot Noir country, where the earliest producer, Eyrie Vineyards is located) and mostly they sell their wine grapes.

Proprietor Jon Jennison makes something on the order of 700 cases a year under his own Thistle label. His 2012 Pinot ($32) weighs in on the ethereal side of Pinot Noir. It's a gem. 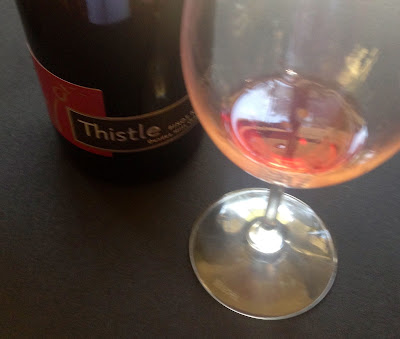 Another winery that's under the radar in terms of Californians' view of Oregon Pinot is Dai Crisp's Lumos Wine Co., another premier producer of Pinot Noir that's a secret not shared with those of us who are "south of the border."

But this tiny, artisanal producer is better known in the higher echelons of those who run the International Pinot Noir Conference. Lumos has been one of only 30 Oregon wineries selected to participate in two of the last three years. Selection is based upon the decision of the IPNC judges. (Wineries can only participate every other year.)


Many Oregonians know Lumos' proprietor Dai Crisp as the vineyard manager of one of the state's most famous vineyards - Temperance Hill. (Thanks to his efforts, all 100 acres of this renowned Eola-Amity Hills vineyard are certified organic.) Many of Oregon's top wineries make a single vineyard designate from the site.

Last spring I toured the vineyard with Dai and was amazed to see how vast it was and how varied the site, soils, exposure and terroir are. Since then, I've been working my way through the various wineries' single vineyard designates from Temperance Hill - including, today, the one from Dai's winery Lumos.
Wine & Spirits rated the 2012 94 points. It's full of black cherry, black raspberry and pomegranate notes - and a whole lot more.

Even though the 2012 was a stellar vintage, I fell harder today for the 2010 Temperance Hill - a lighter, elegant wine that's had time to integrate.

Maysara lays claim to being Oregon's largest organic and biodynamic vineyard, with 250 acres in vine. It's the source of many vineyard designate wines (look for the Momtazi name). Moe Momtazi founded the winery with his wife; today it's run by the couple and their three daughters in a gorgeous, huge stone building made from on site materials.

Marketing director Naseem Momtazi poured Momtazi's 2014 Pinot Gris, a beautiful and lively wine, made, as are all of Maysara's wines, by her sister Tahmiene Momtazi. All of Maysara's wines are certified "Biodynamic Wine," a standard that means there are no additives (other than low levels of sulfites used to preserve the wine).

Maysara's wine range from the very affordable to the very indulgent in price and have gotten a lot of rave reviews.
2. Montinore Estate

Every other year or so, Eric Asimov from the New York Times writes a piece on "20 Wines Under $20." And every time he writes it, Montinore's Red Cap Pinot Noir ($20) is on the list. It's also on a lot of restaurant lists, particularly in New York.

Proprietor Rudy Marchesi's Forest Grove winery Montinore Estate, in the northwest corner of the Willamette Valley, is the largest biodynamic producer in the country. His 230 acres of vineyards fuel an annual case production of 30,000-40,000 cases of wine each year, all from biodynamic vines, although much is bottle labeled "Made with Organic Grapes."

Rudy was pouring the 2013 Almost Dry Riesling, a properly viscous riesling that hovers right on the edge between dry and sweet with just a hint of sweet. (I wish I had it to drink right now with my Sichuan Chinese takeout.) A very "yum" Riesling.

Montinore was also one of the 30 Oregon wineries chosen to participate in IPNC as a featured winery in 2015.

The "New Kids" in Biodynamics: Soter Vineyards and Winderlea

Both Soter Vineyards and Winderlea are in the process of getting Demeter certification and were pouring wines from their in transition vines at the event.

Tony Soter, one of Oregon's top Pinot Noir winemakers, has been dedicated to the pursuit of both organics and Pinot Noir since his time in Napa. He helped Spottswoode go organic in the 1980's; and he ran Etude, a Carneros Pinot Noir winery, for 21 years, before selling it and creating Soter Vineyards in his native state of Oregon.

The estate has 30 acres of vines on a large parcel that's teaming with biodiversity.

At the tasting the "biodiversity" included Soter's sparkling rosé (a lovely among lovelies; I am smitten) along with the estate Pinot.

I'm just getting acquainted with Winderlea, which has one of the few biodynamic estates I have not yet visited in Oregon. (I have driven down the road it sits on, though.) The site is in what's known as Oregon's "Gold Coast" - the red hills of Dundee (in the Dundee Hills AVA), whose red, volcanic soils have stolen the hearts of many a Pinot lover. 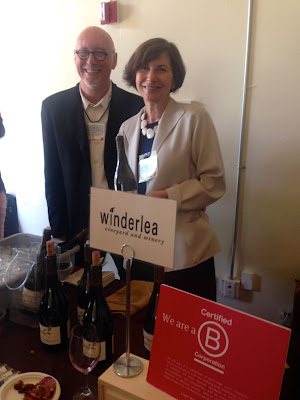 Winderlea's proprietors, Bill Sweat and Donna Morris, moved from Boston to Oregon in 2006, buying an historic, acclaimed vineyard - known as the Goldschmidt Vineyard from 1998 till 2006 - a 20 acre site of old vines (planted in 1974). The location is in one of Willamette Valley's most prestigious Pinot Noir neighborhoods - Worden Hills Road, west of the town of Dundee. The estate is on track to receive its Demeter certification this year.
Posted by Pam Strayer at 8:46 PM