Wine Movies, Continued: The Ways of Wine (By Way of EatDrinkFilms.com)

Movies, movies, movies - since when has wine become such a popular subject for movies? It's only recently.

I'm keeping up to date on the movie screenings of them in the Bay Area, and although I wasn't able to attend a recent screening of The Ways of Wine, I did find it online.

The story centers on a Uruguayan  sommelier who loses his palate and tries to get it back again. The setting is in Argentina, where the real life somm, who did in fact lose his palate, goes to search for the region's best wine, in the magical hope that it would bring his palate back again.

He retreats from the glamour of wine to the basics - a love of soil and the families who tend the vines and make the wines. 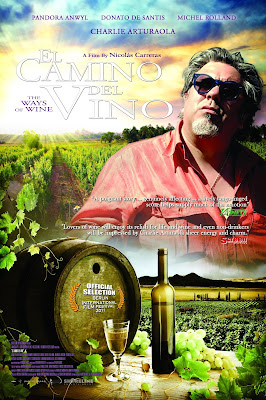 The feature film came to my attention from my friend Gary Meyer, one of the Bay Area's leading champions of great films and a man who brought art house movies to the Bay Area for decades.

Before this, Gary started Landmark Theaters, got the Embarcadero Cinema built (a five year project) and co-curated the prestigious Telluride Film Festival; he still runs the Balboa in San Francisco while hatching his latest project.

Although I wasn't able to attend the Sat. night screening at the Roxie that was part of the Food Day/EatDrinkFilms festival, I did find the movie trailer and the entire movie online. (I would have been happy to pay for that privilege but I wasn't able to find the film on iTunes, Netflix, Amazon or other online outlets.)

So here's a peek (below). If you like what you see, check out the full movie here.

This is a film that screams to be watched with a good bottle of Malbec, si?