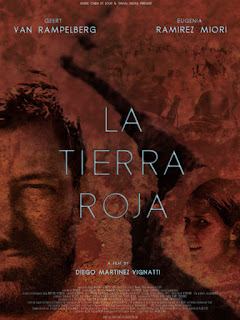 I've been attending the Mill Valley Film Festival all week and today was able to see the North American premiere of Argentinean/Belgian director Diego Martinez Vignatti's film on the largely untold (at least in film) pesticide disaster happening in Argentina and the workers' revolt against agrotoxics.

"It's one of the best films we've seen on chemical agriculture," said festival programmer Janis Plotkin, in her introduction to the film at the Christopher B. Smith Film Center in San Rafael. "And this is the North American premiere."

It's unknown at this point if the film will get a U.S. release. It also been released in Belgian, where Vignatti resides, and in Chilé.

It is also appearing at the Nouveau Cinema festival in Montreal which had this description.

The film tells the story of a community divided - some workers have good jobs at the paper mill, which engages in slash and burn timber cutting. The government is in cahoots with the mill owners. The community opponents, who have seen the devastating effects of agrotoxics first hand, unite behind the village doctor, who sees case after case of pesticide poisoning - high rates of cancer and an unusually high number of babies born with birth defects, along with workers' respiratory illnesses and other diseases.

An all out battle between the two camps soon ensues.
Uniquely, unlike most documentaries on this topic (of which there are hardly any), the film shows the full circle of the community, from the children to the rugby team to the workers and the unionists and medical clinic.

It might send you to the internet afterwards in search of the real stories the film is based on.

To keep up with the film's releases and news, join their FB page here.

The way that pesticides have been applied in Argentina is an ongoing horror story and reminds one of earlier eras in the U.S. where huge amounts of organophosphates and Roundup were applied at much greater levels of concentration.

In a way, the film shows the progress, in comparison, that we have made since the days when Cesar Chavez fasted because he felt powerless to protect farmworkers (including vineyard workers) from the effects of the highly toxic organophosphates and other agrotoxics).