Is it the story that could never actually be told in film? Or will one more try get it right?

Warren Winiarski and Mike Grgich's Big Win, in 1976, in that Paris blind tasting has become the stuff of legend - and a tale told in many a medium.

First it was a George Taber book - The Judgment of Paris. That was true to the facts, as we know them.

Taber was the only American journalist at the actual event, in which the Napa wines win against grand crus from top French estates in an upset victory that made the fortunes of Napa and California's fine wineries and helped the U.S. industry grow to its current $32 billion size.

Next, the story was hijacked for an indie revisionist history film, writing both Grgich and Winiarski out of the picture, when the story became the Chateau Montelena version immortalized in Bottle Shock, a 2008 indie pic that was produced by the founders of the Sonoma film festival and focused on the story of the Barretts alone in a highly fictionalized account (a boxing match staged at Kunde, a girl winery intern at a time when there weren't any, etc.). Memorably, the movie starred British star Alan Rickman, who had appeared in one of the director's earlier movies, as a snobby version of the British wine tasting organizer Steven Spurrier.

Then the Grgich story came to life, courtesy of Croatian television, in a documentary on Grgich, Croatia's most famous native son.  Grgich's story is now in the Smithsonian Museum in D.C. (where the suitcase he came to America with is on display). The film is called Like the Old Vine. It's a very good film - but you can't find it anywhere except the winery.

Croatian television followed up with a second documentary that was even better than the first - Dossier Zinfandel - a ripping good yarn about the search for the genetic origins of Zinfandel, a story in which Grgich plays a leading role. (Sadly, this film is also only available on DVD at the following tasting rooms: Grgich Hills in Rutherford, Ravenswood in Sonoma and Ridge Vineyards in Healdsburg.) It is well worth searching out. (Apparently Croatian television is not very into international distribution - and more's the pity.)

Now it's time for another indie feature film take.

The latest twist is that Sonoma screenwriter and vintner Robert Kamen (writer of Karate Kid as well as the Taken series and the 2005 wine romance film A Walk in the Clouds) is working on a new feature to be produced with Jonathan Rotella, a medical entrepreneur (with a chain of wound care clinics). Rotella has fallen in love with Winiarski's rags to riches wine story.

Kamen's version promises to tell the story of both Winiarski and Grgich through the "outsider" eyes of the American journalist George Taber.

Recently Kamen visited Mike Grgich (now age 91) to shoot some footage for the project. Enjoy these photos from their shoot.

The $10 million project is currently seeking investors. For more information (and a brief trailer), click here.

And, for those who are interested, both Grgich and Robert Kamen's Kamen Estate make beautiful wines that are quite different from each other stylistically but both are a.) organically grown in the vineyards and b.) recipients of top ratings from critics. 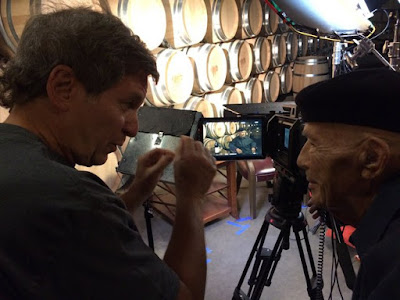 Kamen makes wine on an estate (50 acres of vines) on the Sonoma side of Mt. Veeder, in what is now the Moon Mountain District AVA. The site has stunning views of the San Pablo Bay.

I highly recommend the vineyard tour - it's by appointment only, but well worth it. It's on my list of the Top 10 Best Wine Tours in Sonoma.

Grgich Hills Estate has a wide variety of wine tours on offer ranging from walk in wine bar tastings to special seated tastings where visitors may even get to hold a bottle from the Paris Tasting. Check the web site for details.
Posted by Pam Strayer at 6:41 PM