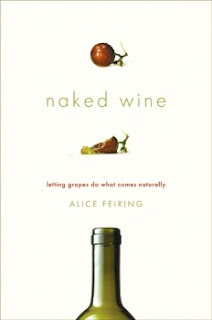 Alice Feiring is the Woody Allen of the lefty wine world - a natural wine lover who seems a bit overanguished about her obsessions, which in this case is the purity of natural wine.

In this book, Naked Wine, she at least mentions the devotion to the Talmud that runs in her family history - which goes some ways in clueing us in to why she's - would saying neurotic be going too far? - about wine. She likes adherence to a philosophical standard.

Alice has a very fine writing style - at least she's charmingly neurotic at times - and manages to get a lot of mileage about not very much happening.

She comes to California to try her hand at making some wine (not sure why she never tried it in France, given the number of trips she has written about there), but she decides to put the pedal to the metal in Dry Creek at Davero. Woe to the winemaker who assists her, as all manner of impure processes proceed to take place - mostly having to do with the fact that she hasn't raised the grapes herself, let alone picked them, and they end up having to water down the wine, which would be illegal in Italy but is not in California, as the wine is too alcoholic (picked too late).

Alice then goes to France, on a pilgrimage to the altar of various natural wine gurus, who tell her there really are not as many rules as she may have been led to believe by the French natural wine choir boys.

She returns to California and lo and behold "discovers" the Coturris, who have of course been making natural wine in Sonoma for 30 years, longer than her French idol. 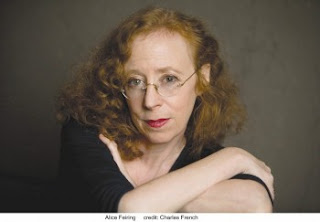 Is this somewhat offensive to us Californians? For myself, I would say yes. There are so many natural wine makers here - she mentions only 3 or 4 of the 20-40? Perhaps she is coming to see the film Wine from Here tomorrow night in order to learn about the others. Being a Frenchie, she got her intro to natural winemakers here in part from the guys at Terroir, who used to work at Arnot-Roberts, but mostly import French natural wines, as they do not like most California natural wines (when they acknowledge their existence.)

At least she also meets the Natural Process Alliance guy, Kevin Kelley (who has to have the worst wine site on the Internet, and yet fantastically fun fresh wine).

In Alice's book, a favorite scene for me was the one where she's visiting the eminence gris of the natural wine movement...and instead of sipping and spitting, everyone is drinking. This makes Alice uncomfortable as she wanted to interview the chap - Jacques Neauport.

There is a big emphasis in the French natural wine movement on not adding sulfur, which has her American friend and French vigneron Amy (whose hubby has a job at Cisco which allows them to live in France telecommuting) anxious, too, since her wines are ever so slightly sulfited.

Jacques tells Alice they started making no sulfur wines because they are drunkards who don't like to get hangovers. I want to say, Alice - let go and drink! That's what wine is for - not for critiquing, so much, searching, so much, and testing purity, so much.

My beef with natural wine here continues to be the lack of certification for a large percentage of all of the grapes used by "natural winemakers" in California. (This is a contrast to their French counterparts who are organic and who also do not irrigate in the natural movement.)

I once asked Glenn McGourty, probably the most knowledgeable go to guy in California on organic viticulture, about natural wines. "I don't know what that is," he said. As do many others.

Most broadly defined, it means purity - i.e. no added sulfur, no chemicals, etc. etc. In France it means organic. But if you ask negociant wineries like Wind Gap, or Arnot Roberts or A Donkey and Goat - as I have - if they are organic, they mostly say no. We don't know if no means it's organic but not certified or if it's not organic. They also use irrigated fruit, unlike the French natural wine makers. Natural, to Alice Feiring, really means also growing your own fruit - the vrai vigneron model.

Almost all unsulfited biodynamic wine by definition then qualifies as natural in the American context (assuming irrigation and organic and native yeast), but you'd never know that from the California natural wine hype. Because unlike the biodynamic bunch, who are very certified, many (but not all) naturalites don't believe in certification of any kind. As Clos Saron's Gideon Beinstock explained to me at the Family Winemakers of California event this weekend, "it's just a game."

In Alice's definition, one must raise the grapes as well as make the wine. Which, of course, is not something she has ever done. Perhaps she will in her next book. :)

Oh I did have a few good tidbits from the book to share:

Nearly thirty wineries were shut down in Hebei Province (in China) in 2010, after the discovery that some Hebei wines contained only 20% grape juice.

(I read today that the wine thieves were being sent to prison.)

It is misleading on page 35 that Alice talks about pesticide residues being found in wine in a PAN Europe study (they were but the amounts were minute). She's got it a bit screwy - the main danger from wine grape pesticides is to the environment and to the workers - but she doesn't mention this.

On page 69 - I love how she describes Nicolas Joly - "Joly has become the Deepak Chopra of wine biodynamics."

And I hadn't known (page 73) that Demeter USA (go Demeter-USA) "is steps ahead of Europe's certifying arm."

It's fun hearing in her book about the stupid things the French wine industry does.

But it's ridiculous how little she knows about California's BD wines, completely dissing them in a French competition. (Has she never tasted AmByth? Verdad? Qupe?)

Classic Alice as philosophe: "Vin naturel should be naked wine; it is honest, transparent and sensitive." Well if you have to believe in wine...

(Ironically searching "Naked Wine" online leads to two primary destinations - an organic brand from the Snoqualmie, or the next-day delivery service in the UK. And CalNaturale - the boxed wine in tetrapaks sold in supermarkets - has that "natural" name and may in fact be the only "natural" product in the supermarket that's actually organic and certified.)

The education of Alice will continue, no doubt, and we can continue to hear about the journey.
Posted by Pam Strayer at 8:19 PM