What a Decade of Organic Farming on Great Terroir Can Do: Oakville Ranch Hits Its Stride (and Debuts a New Reserve Wine)

In 2007, Sonoma's organic rock star vineyard expert Phil Coturri was not of a mind to work in Napa. He'd turned down many who had asked. Coturri was already busy with clients. (Today he says he has 150 employees). But the red dirt of Mary Miner's Oakville Ranch, just north of Atlas Peak, reminded him of the vineyard he grew up on - Monte Rosso. And it is known as one of the premiere grape growing spots in all of Napa. So how could he refuse?

Today, 11 years since he arrived, the vineyard is better than ever, and with winemaker Jennifer Rue, who's been involved with the property even longer than Coturri, and general manager Shelia Gentry as the guiding force, Oakville Ranch's wines are reaching new heights.

A few years back, Decanter called the tiny winery (which makes just 750 cases a year) "a sleeper among superstars" and that pretty much describes the winery today.

It's one of those places that you would never find on your own. Unlike Harlan, it's not impossible to go there. You can just call and make an appointment. Unlike luxury brands that charge $150+ to visit, the tour and tasting fee is $45 (refunded with purchase of wine). And unlike many under the radar wineries, its wines have been recognized by Decanter and other top tier wine publications with high scores.

The winery has a wine club offering the limited release wines. Those who come to taste (or buy) usually know someone else who's visited. But only on a weekday, since that's the only time it's open for by appointment visits. All "advertising" is word of mouth.


This gem in the hills above Oakville, adjacent to Atlas Peak, mostly grows grapes for more than 10 other wineries, some of which are sold as single vineyard designates. The winery retains about 15 percent of the grapes for its own brand.

Oakville Ranch was started in 1989 by Bob Miner,  the co-founder (with Larry Ellison and Ed Oates) of tech giant Oracle. Miner wrote the code for the foundation of Oracle's relational database management system. (In the late 90's, the company was the second largest tech firm in the world, just behind Microsoft; today it is valued at $28 billion.)

Bob and his wife Mary bought the property as a weekend getaway as well as a tennis court. They liked the wine aspect, but it was also a social gathering spot and a place where Bob could play tennis.

The property had been a place for raising grapes even before Prohibition.

The wine brand is part of his legacy in Napa. There are others. The SF Jazz Center's auditorium is named the Robert N. Miner Auditorium. And his family continues to support many philanthropic projects from environmental causes to the arts and beyond.


When the Miners purchased the property in 1989, the vineyard was farmed conventionally. Tragically in 1994, Miner died of pancreatic cancer at the age of 52, leaving Mary Miner, his British born wife, to continue onward on the estate. A resident of San Francisco, she visits on weekends. (Miner Family Vineyards, on Silverado Trail, belongs to her nephew, to whom she sold the winery she and Bob used to own).

Bob Miner enjoyed field blend wines, so the vineyard has a 1.5 acre block of head trained Zinfandel and Petite Sirah, and he loved Cabernet Franc. Hence, the winery makes a highly regarded one called Robert's.

The steep chapparral hillsides around the vineyards remind one of Atlas Peak, and indeed, that appellation is just a bit south of Oakville Ranch, which is classified as being within the Oakville appellation. (Miner petitioned to become part of Oakville as it was not originally within the boundaries.) The red volcanic dirt up here at 1,100 feet of elevation is related to, but distinct from, the soils below, home to Screaming Eagle and Rudd Oakville Estate.

In 2005, the estate was replanted and subsequently (several years later) converted to organic farming. Today there are 66 planted acres on the 330 acre property. 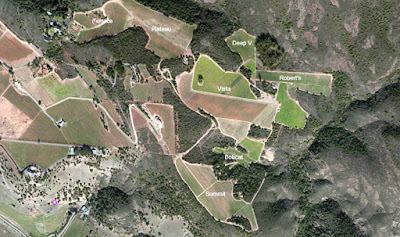 Oakville Ranch's fruit is world class. "It's a real privilege to be able to grow grapes of this caliber," says Coturri. "We've produced 100 point wines from this vineyard. These grapes are on par with Screaming Eagle and Dalla Valle."

Winemaker Jennifer Rue has seen the changes in the vineyards since Coturri and his year round crew arrived. "One year, I came around the bend into the vineyard and I just burst into tears when I saw how much life had returned to the land," she said.  "It is so beautiful."
The winery sits in a bowl, a hidden valley, at the top of two different watersheds - the Rector Reservoir and the Napa River. Coturri is proud that the water that drains from the land is free from pesticides. He estimates the winery has saved 40-60% of the water it used to use for irrigation with the installaition of double irrigation tubes, which enable him to do more precise irrigating. Misters are coming soon which will further decrease water use.

In the beginning of his tenure, he implemented a lot of major vineyard improvement projects. The Chardonnay vines moved from one site to another block. Other vine rows were rearranged. Now, Coturri's excited to enjoy the fruits of these labors. "At this point, we've hit a certain rhythm here that the development projects are done," he said. "Now we can celebrate the vines as they get older."

Coturri has 11 winemakers to work with, who all source fruit from the vineyard. "Each of them has a different idea of what ripeness is," he says. Winemakers and labels include Rosemary Cakebread, Helen Keplinger, Mark Herold, Thomas River Brown, Andy Erickson (Favia), Dalla Valle, Memento Mori, Dakota Shy, and Philippe Melka. "There's a lot of different stylistic approaches," Coturri says. Each winemaker decides when it's time to pick.

Once a year, the winemakers all get together to taste the different interpretations of Oakville Ranch grapes.

Oakville Ranch's own winemaker Jennifer Rue, now on her 20th vintage, has been intimately acquainted with the property since 1996. 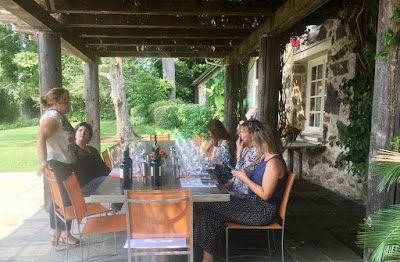 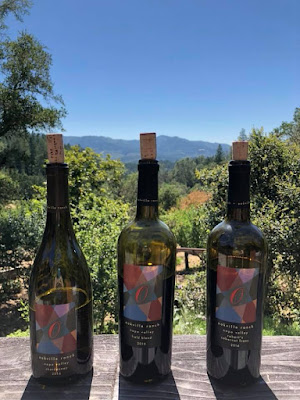 During a writers' group tour and luncheon yesterday, Rue and Gentry led a tasting of the 2017 Chardonnay ($55) and the 2015 Field Blend ($55), a blend of co-fermented Zinfandel and Petite Sirah and one of my perennial favorites. It's a quintessentially Californian wine that pays homage to Napa's past. Elegant and distinctive, this "field blend" is definitely in a league of its own, but still retains a lovely peppery note on the finish. The Chardonnay was crisp and pure, barrel fermented and aged in French oak (50% new).

Robert's Cabernet Franc is among Oakville Ranch's finest selections and one the winery is known for, and not just because Napa Cab Francs are not that common. With 100% Cab Franc (aged in 80% new oak), this is a precise, translucent expression of this prima donna varietal (65 cases made, $110).

Cabernet Sauvignon is the heart and soul of Oakville Ranch, and the winery's own Cab, sourced from the 6+ different vineyard blocks of the varietal, is outstanding with blackberries and blue fruits. The tasting included both the 2014 (270 cases made, $98) and the 2015 (as yet unreleased). The 2014 is blended with Cabernet Franc (15%) and spends 12 days on the skins, before resting for two years in French oak puncheons (75% new). (For people who care about points, the 2014 got a 90-93 point rating from Galloni.)


A tour and tasting includes a ride through the vineyard on an electric cart, a stop along the way at a vista point (with a view of the entire Napa Valley), and a tasting of wines in the garden, overlooking the pool and the valley.

The winery is only open on weekdays (by appointment only) and for small groups.

Oakville Ranch offers a personal, intimate experience at a great Napa estate, something rare and precious. I will admit that when I'm asked by friends where to go in Napa, I often recommend Oakville Ranch. Whether you're a beginner in wine, on your first trip to Napa, or a collector, who thinks he/she "knows" Napa, Oakville Ranch has much to offer.

Where to find the wines on restaurant wine lists: Cole's Chop House and Rutherford Grill
To buy: You can also find the wine for sale in Yountville on the shelves of Ranch Market as well as direct from the winery (online or in person).
Posted by Pam Strayer at 1:41 PM