The Santa Rosa City Council voted this week to eliminate the use of Roundup, including glyphosphate on city owned properties.

The Press Democrat wrote that Brandalyn Tramel, "city purchasing agent, said the contractor had used glyphosate 'sparingly and as a last resort' since 2014."

Megan Kaun, a former Santa Rosa resident (who now lives in Sebastopol), began campaigning against the use of the chemical in a park where her children played in 2015, organizing local residents to pull weeds so that the carcinogen would not be used in the park.

After the city council vote, Kaun said (in an email), "I still can't believe it happened! After 3 years of 'collaborative arguing' with the city, it turns out that banning pesticides [herbicides included] was as easy as making a call to their landscape contractor. Go figure."

"That being said I knew it would never have happened without supporters spreading the word about the issue and putting pressure on our politicians and civil servants. Now if we could only get the county to stop spraying roadside ditches."

"I had a long conversation with the Recreation and Parks superintendent and it seems like their non-toxic maintenance plan moving forward is sound. They will use two organic products (tested and approved by NonToxic Irvine) - Suppress and Finalsan - and will also do more weed whacking and hand pulling."

Kaun had earlier organized parents to weed a local park her children played in, as an alternative to having the city spray Roundup there.
Novato, another North Bay community, also voted to end the use of glyphosate this month. A year ago Petaluma said it was exploring alternatives to the herbicide.

Benicia, the city in which the school groundskeeper got cancer from using a glyphosate based herbicide, has already banned its use. (This is the famous case in which Monsanto was ordered to pay $289 million including $250 million in punitive damages this month). Richmond has also banned glyphosate from city grounds.

Though the city will no longer use glyphosate on city grounds, area vintners do use large quantities of the herbicide. 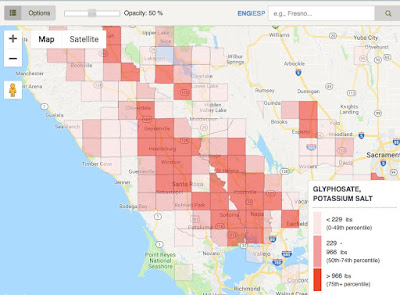 Local citizens are still concerned about impacts on children and schools from vineyard chemicals.

In a letter to the editor of the Press Democrat, Reuben Weinzveg wrote this week that "over 100 schools in Sonoma County are within 1/4 mile of a farm that uses pesticides [agrochemicals]. The majority of these farms are vineyards, which is worrisome because 98 percent of the vineyards in Sonoma are treated with synthetic pesticides [agrochemicals]."

Sebastopol banned glyphosate from most school grounds and city parks in 2000.
Posted by Pam Strayer at 9:59 AM