Moving On Up (The Central Coast): Verdad and Qupé's New Arroyo Grande Tasting Room Rings in the New Year

Used to be that Los Olives was a sleepy little town. That was back in the days before the movie Sideways made Santa Barbara County the place to go for Central Coast wine tasting. But no more. Today Los Olivos is as precious as St. Helena in Napa County or Healdsburg in Sonoma County.

Qupé and Verdad used to have a tasting room in Los Olivos, until they took on an investor who promised to, among other things, give them the hottest spot in town - inside Mattei's Tavern. That was until Charles Banks IV, the new owner, was convicted of wire fraud in 2016 and lost his fortune and his reputation. He also lost the tavern, For Qupé, it was time to regroup, rethink and relocate. 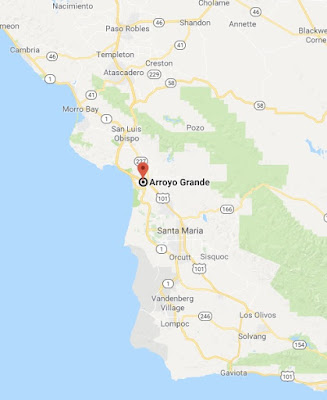 The result is a fabulous new tasting room in the uncrowded town of Arroyo Grande, 15 miles south of San Luis Obispo, 45 miles south of Paso Robles, and 45 miles north of Los Olivos. That makes it accessible to wine tourists going to Paso or the Solvang-Los Olivos area. The new location in Arroyo Grande is also right on the well trafficked road to Pismo and Avila Beach.

The tasting room site is also much closer to Qupé's estate vines - the Biodynamically farmed Sawyer Lindquist Vineyard - in nearby Edna Valley. Here the coastal influences cool the site enough to produce what Eric Asimov of the New York Times calls "the best Syrah in America."

I would add that in addition to the Qupé Rhone estate wines, the Sawyer Lindquist Pinot Noir, also from the estate, should not to be missed. I served it (among 4 different Pinots) at Thanksgiving, and put it on my list of top bottles of 2017.

For those who don't know Verdad and Qupé, the wineries were created and run by the Lindquist family.

Qupé is one of the great California producers with deep roots in the Central Coast wine region and has a longstanding commitment to sourcing its wine from organic and Biodynamic vines as essential elements in creating the best quality wines.

Little known fact: on the winemaking side, the Qupé estate wines are also notable (in my mind) for being  certified "Biodynamic Wine," which means that no additives (except for a small amount of sulfite) can be added. This approach relies heavily on the pure flavors of the grape. You can count on one hand the number of great California estate producers who are willing to bet the quality of their wines on their grapes to this extent.

Vintner Bob Lindquist was one of the original Rhone Rangers. He saw the potential for great Syrahs in California, before that was "a thing," founding Qupé in 1982. In 2015, The Rhone Rangers honored him with a lifetime achievement award.

Louisa Sawyer Lindquist started in the wine business on the East Coast where she worked for the first winery on Long Island. Later she became involved in wine selling at Lauber Imports in New York, Julliard Alpha Wine and Spirits and at Southern Wine & Spirits in San Francisco before meeting Bob Lindquist. She began selling Qupé wines, but later launched her own label, Verdad, devoted to Spanish varietals (Albarino, Grenache and Tempranillo).

For many years her Biodynamic rosé was my absolute favorite (and I used to buy cases and cases of it). Sadly this wine is no longer made solely from Biodynamic estate grapes, following Charles Banks' investment in Qupé.

The Lindquists acquired their Edna Valley vineyard in 2002. The vineyard was farmed Biodynamically from the beginning. It was originally planted by Philippe Armenier and, since 2013,  has been owned and managed by Brook Williams who brought in Philippe Coderey as the Biodynamic vineyard consultant.

Here in the Arroyo Grande tasting room, for a mere $10, you can sip and savor all of these great wines, plus their Pinot, with a view of this charming small town that feels more like a community, and less like a tourist trap.

The wines themselves will continue to be in the location of your dreams - in a dramatic setting in the Santa Maria Valley. The winery will be open twice a year for special sales just as it has been for the past several decades.

There's a turntable in the tasting room with a bunch of vintage tunes - check out their collection. Bob is also a great Dodgers fan and there's a wine club trip to see a Dodgers game each and every year.

Here's to a happy - and prosperous - new year for Verdad and Qupé in their new home.