Heitz - Free Tasting - And an Open Bottle of "The Martha"

Heitz is one of the lucky ones - "lucky" enough to have won a top spot in the famous 1976 Judgment of Paris, with its Martha's Vineyard Cabernet.

If your wallet is fat, you can find a bottle of some famous vintage at the French Laundry for $4,400.

Or you can get lucky yourself. And find an open bottle of The Martha in the tasting room (where there's not even a charge for tasting at all). That's right - a whiff and a sniff and a swizzle and a swallow of pure Martha.
That is the wine Wine Spectator named one of the top 12 wines of the century. Ah Napa - you haven't lost all your magic.

I have to say, I've been tasting Cabernets all week pretty intensively across Napa and I was surprised at how distinctive "The Martha" was right away. It's got a mint smell that's not usually found in a Cabernet. It turns out this comes from eucalyptus trees in that vineyard. The latest release is $200 a bottle but there's a sale on now for the 1998 which has aged about enough. Perhaps it was not a great year then, but at this point, it's selling for $110 a bottle - you'll have to try it and tell me how it's drinking.

A bit of background about Heitz:

• It's widely recognized as the first American winery to focus on single vineyard wines.

• While their tasting room looks historic, the tasting room person told me it was not. She said the building was only 11 years old.

• In the 30th anniversary rematch of the Judgment of Paris, Heitz's Martha moved up even higher in the competition, placing fourth.

• It's a perfect, easy, no-appointment-necessary stop on Highway 29. 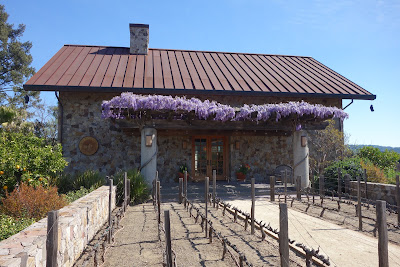 On the certified organic front: more and more of the vineyards they source from have become certified organic over time. The Martha, their Trailside cab, and their port come from certified vineyards. The sales person said that a few more vineyards have also been certified, but the certification has not yet been updated on the tasting room maps or in the online listings, so check at the winery.
Even their very fun and light (and distinctive) rose, a Grignolino, comes from a certified vineyard, according to the tasting room hostess. (It's out of stock right now - but will be released shortly).

Another unique wine from Heitz is their port (extreme right, above), which is grown in their Ink Grade vineyard. I was unable to resist, and came home with a little bottle and a big bottle. One is a gift. I'm not sure which size I will part with. 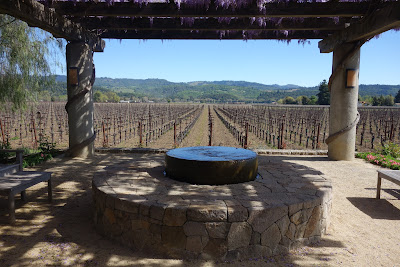 The other competing fragrance was the beautiful wisteria, which are just peaking now. Step outside on the back deck at Heitz and sniff away. It's free, too - and oh so beautiful. 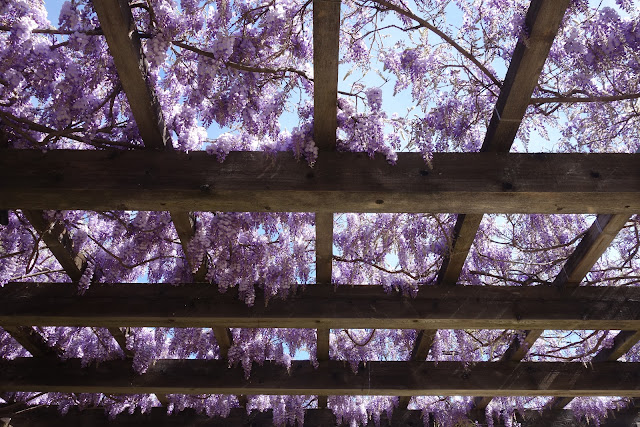