The Paso Robles Wine Country Alliance came to Oakland last month, putting on a wine seminar and a tasting that brought in several hundred of the winerati, who are more normally oriented more in the North Coast direction, to explore the fruits of its vines. 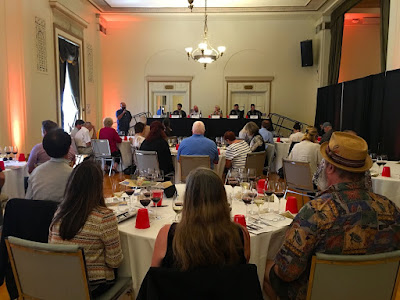 It's a region that, despite its age, still feels like a group of a few adults mixed up with a bunch of teenagers. There are great wineries and there are crazy, naive wineries. There are accomplished growers and winemakers pouring gorgeous expressions of Rhone grapes and then there are wild-eyed madmen coming up with Cab-Syrah-Zin-whatever bathtub blends. And there are noted winemakers playing up unconventional combo blends, too. It seems to be a place where anything goes.

The USDA handed out quite a bit of funding to the Paso folks this year to promote their wine region - $312,000 - but that was just to publicize it in the state of Texas, not the state of Oakland. Hopefully Texas drinkers will appreciate that sense of grand experimentation going on in Paso blends. Presumably, these great and the not-so-great blends all go well with steak. (Don't take this as Texas bashing; I was born in Texas although I left when I was four, just old enough to have petted Trigger and Buttermilk while I was there.)

Anything goes in Paso - except perhaps lowering the water table (read: Justin and others) and cutting down hundreds of old oak trees - not once but twice (read: Justin).

The seminar leader, Chris Taranto, communications director for the alliance, promised to tell us more about all the new appellations in Paso. In 2014, it created 11 new sub appellations, and I think a large part of the audience had arrived that day hoping to hear more about them, trying to understand what makes Paso's different regions unique. What were we to make of Adelaida District AVA and El Pomar District AVA? No time for that. Four winemakers had us taste through their wines individually and then time was up. (Don't you think they paid handsomely for this privilege?) 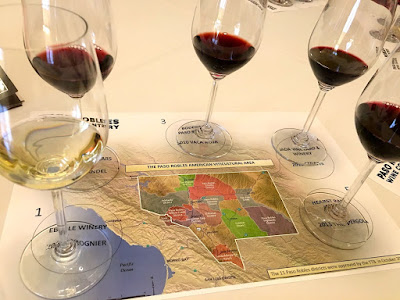 Part of the event's success, however, was simply having the gathering in Oakland at the historic Scottish Rite temple. The setting was superb, situated near the lake and with it own parking lot. It's a gorgeous historic venue. More like this, please. 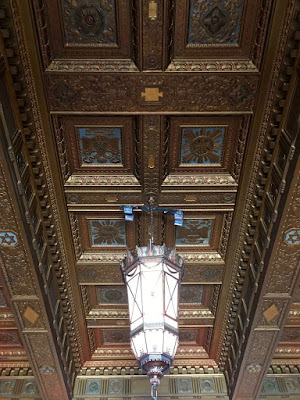 Some 30 vintners were on hand to display their wines. 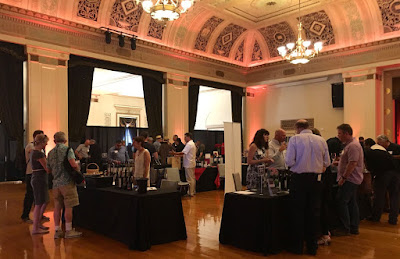 The two of note for me were Tablas Creek, with its full complement of estate grown, organically farmed Rhone blends. It has four main blends - a red and a white Cotes de Tablas and a red and a white Esprit de Tablas, each built around a different varietal. The red Cotes is based on Grenache, while the white Cotes is centered on Viognier. The red Esprit is focused on Mourvedre, while the white Esprit is mainly Roussanne. 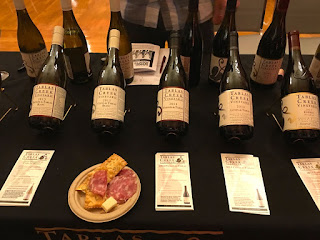 Since I'm more of a red wine fan than a white wine fan, the red Cotes and the red Esprit were the wines I gravitated toward. The red 2014 Cotes tastes of black cherries and blackberries - bright fruits - with spices. 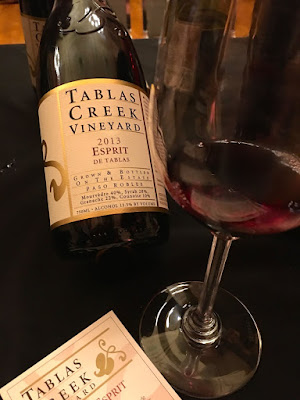 The deeper yet still medium bodied 2013 Esprit, with its Mourvedre core, is tempered by the Syrah, Grenache, and Counoise. The last adds peppery notes to the bright fruits.

Of course, Tablas Creek is well known as one of the great vineyards and wineries of the Paso region and one (among others) that really helped to put it on the map. It's an enterprise that brings together two great wine families. On the one side - the Perrins, of Chateau de Beaucastel in the Rhone, one of the most famous Rhone wineries in a region known for Chateauneuf du Pape wines. On the other side is the Robert Haas family. Robert Haas is a very successful wine merchant in the U.S., who imports the Perrins' wines. His son Jason Haas, is the general manager at Tablas Creek today. The combination of the two families' expertise has made Tablas Creek flourish and wine lovers rejoice.

Another winery I track in the Paso region is tiny, by comparison, but noble in its aspirations and references - Giornata. It is a lover of limestone, like Tablas Creek, but in a different way - to express its Italian dimensions.

Making wine from the fruit of Luna Matta's organic vines, Stephy and Brian Terrizi produce Aglianico, Fiano, and Nebbiolo. Italian somms may scoff, but former San Francisco Chronicle wine critic Jon Bonné called their Nebbiolo "the most successful Nebbiolo yet in the state." 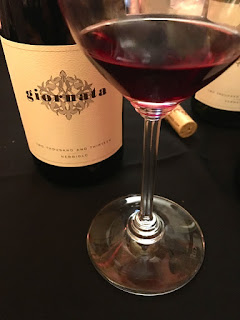 I hope to have a chance to tour the vineyard sometime and see for myself if it's got the fog that makes Nebbiolo legendary. The 2013 ($45) still needs time in the bottle for its bright yet complex strawberry flavors to develop. It's a reminder that some of Paso Robles' experiments yield beautiful fruits of the vine, pleasures worth waiting for.

Postscript: One question for Paso remains - why so few organic vineyards? You can count the vintners with organic estate vines on one hand - Castoro Cellars (350 acres) and Tablas Creek (125 acres) - and then there's just one tiny (but important) Biodynamic winery - AmByth Cellars (20 acres). There are a few dedicated growers - Luna Matta and Pine Hawk (60 acres)- but that's it. That comes to around 550 acres all told, with most from just two wineries.

With 41,000 acres in vine, let's hope the good folks of Paso get more interested in organic viticulture. Right now they're batting just 1.3%. I look forward to the day when they do more. (For comparison's sake, Napa's at 7 percent certified organic vineyards out of 40,000 acres.) What can consumers do to help you grow your organic side, Paso?

Postscript, Sept. 1: I had omitted two Paso Robles vineyards above - Maha Estate, which just certified 14 acres in 2016 (organic and Biodynamic) and Thomas Hill (organic) which has fewer than 10 acres of organic vines.
Posted by Pam Strayer at 11:00 AM