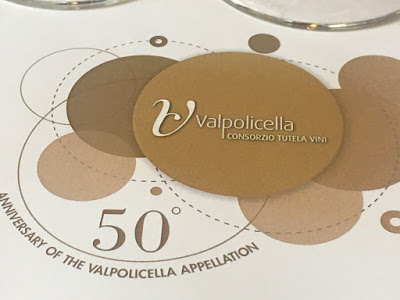 Valpolicella is having a moment - a 50th anniversary moment. You may remember Valpolicella as the go to "Italian-restaurant-wine" available in suburbia, but the world has changed. Just as Zinfandel has come up in the world (once it was lovingly vinified by the greats like Storybook Mountain, Turley, Ridge), Valpolicella's blended red wines have set their feet on higher ground.

This northern Italian wine region in the pre-Alps foothills near the city Verona (where I traipsed, like so many visitors, to see its exquisite Palladio theater) first became a recognized DOC in 1968. It upgraded to a DOCG in 2008. And on Monday this week, SF tasters had a chance to learn more about the region in a tasting sponsored by the Consorzio Tutela Vini Valpolicello lead by WSET Diploma holder Deborah Parker Wong, a writer and educator. 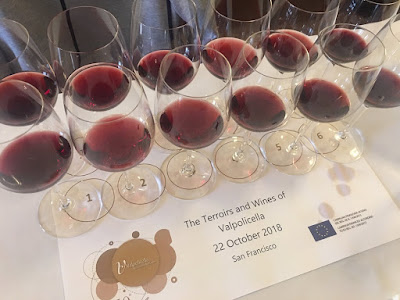 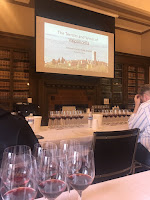 Once upon a time, Valpolicella's quaffable red wines were not really noteworthy, but today they've grown up, like much of the rest of Italy since the 1960's, and the stylistic spectrum presented Monday was both nuanced and diverse.

Those familiar with the Veneto region will know that the area has two sides - Soave, famous for white wine, in the east, and Valpolicella, famous for red wine and for Amarone, in the west. 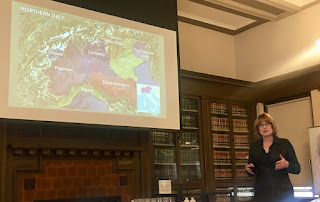 Valpolicella's hallmark grape - the thick skinned Corvina - is the star of the show, but Valpolicella wines are also known, like Rhones and Bordeaux blends, for their skillful blending, giving winemakers a lot of choice in creating a wine that shows their style.

The cherry, slightly bitter (in a good way) notes of Corvina are combined with the other traditional varieties of the region to make a wide variety of blends. It's said that, "Corvina brings the fruit to the blend," while in contrast, another blending grape, Corvinone, with its big fat berries, "brings the spice." A third variety, Rondinella, "brings the flowers."

One of the most culturally interesting aspects of Valpolicella is its long standing historical tradition of vinifying wine by refermenting it, a practice that makes what are called Ripasso wines. These are light wines that are essentially beefed up (in a good way) to be lovely, medium bodied wines, with the addition of up to 30% semi-dried or "withered" grapes.

The region is also famous this practice of withering, which today is done on wooden racks in the winery (not on straw mats, like raisins or grapes for sweeter wines, in other regions).

(For more details on the possibly ancient roots of ripasso and withering, see Michael Garner's excellent book Amarone and the Wines of Verona, available on Kindle as well as in print form). 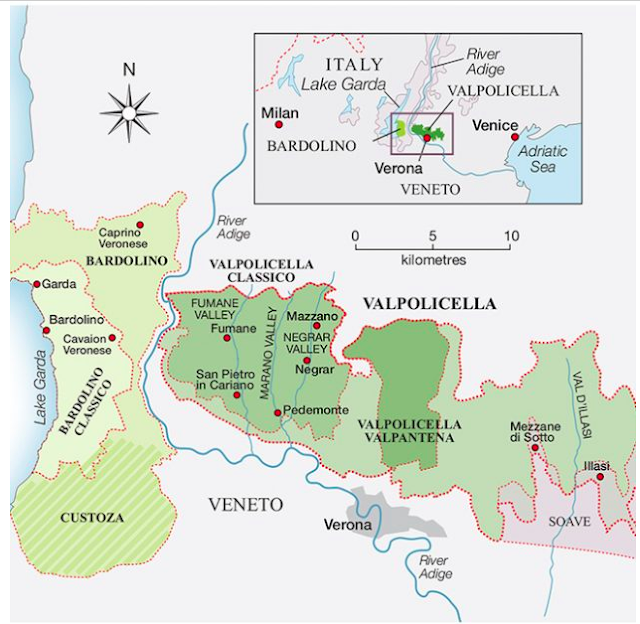 In addition, site, as usual, plays a major role in the taste of the wines, which are grown in five parallel valleys (each of which runs north/south) and at elevations averaging 200 meters. Soils range from limestone to limestone/clay and some igneous/basalt soils as well. The oldest soils are in the westernmost part of the region, called the Classico. The warming influence of Lake Garda to the west can be seen in the wines.

Trellis systems are also quite important, with the old school pergolas dominating historically, but with more modern plantings using Guyot. Today some vineyards are returning to the use of pergolas. In the Classico area, the split is about 50/50. The classic grape Corvina performs better at high elevation and on pergola, Parker Wong said.

Traditional crops in the area include olives and cherries, and both are often grown in vineyards.

Of the 12 wines we tasted, three were from certified organic or Biodynamic vines:

This 47 acre Demeter certified vineyard produces 7,000 cases of wine each year. Run by Marinella Camerani, the vineyard was first certified organic in 2003 and became Biodynamic in 2010. The winery produces 2,000 cases of the Ca' Fiui in the Mezzane di Sotto region, in the east of Valpolicella, outside the Classico region at the edge of the Soave region.

"Fruit saturated acid!" Parker Wong proclaimed glowingly, as she tasted this wine. On the palate: cherries with rose notes, slightly bitter and lively. The blend included 50% Corvinone ("the spice") and the wine had an assertive finish. 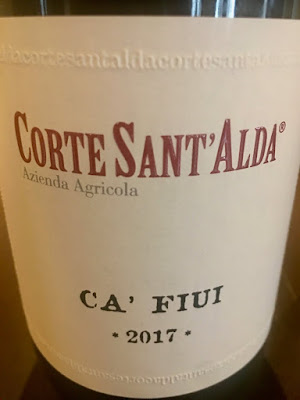 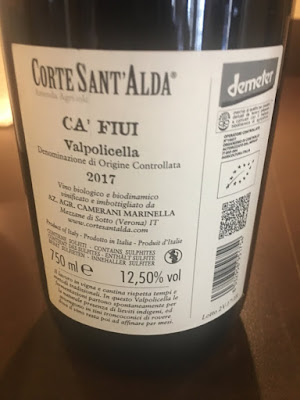 Ripasso wines are the refermented wines. The Veronese winemakers are the only ones in the world who use this technique (according to Garner). They are hardly available in the U.S., according to Parker Wong; almost all consumed by Europeans, who quite like them.

Novaia is located further west and north of Corte Sant'Alda, in the Marano, in the northern part of the Classico region. There the Vaona family makes 3,750 cases a year from their 17 acre vineyard. The estate was certified organic in 2014. Some are designated cru vineyards.

The soils are an unusual blend of clay and volcanic tuff.

With 70 percent Corvina in the blend, this wine was light and vibrant with lively notes of pomegranate, cherry and plum. 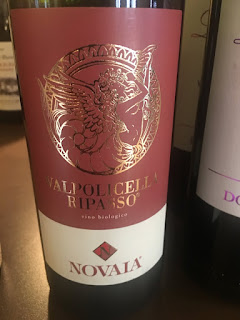 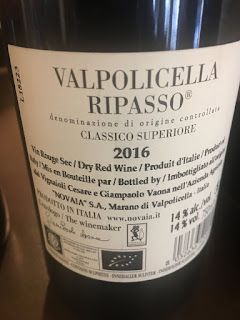 The Aruznaths were among the ancient peoples who lives in this region, I learned later in Garner's book, which must mean something when it comes to the name of this wine.

Valentina Cubi, in her 80's, runs this winery with her daughters in the next valley over from Novaia, south of Fumane. Her family's 32 acres of vines were certified organic in 2014.

Stylistically this wine was the opposite of the Corte Sant'Alda - a wine much lighter in style, very harmonious. "This wine is a personal favorite of mine," Parker Wong confessed. 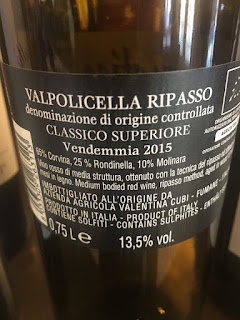 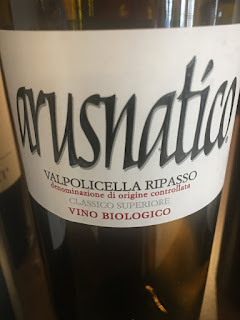 To give you more of a sense of the landscape, here's a video of the Corte Sant'Alda vineyard from a few years back: