Bayer Stocks Drop 8% More in Response to Latest Glyphosate Court Ruling; Down 38% in One Year

Superior Court Judge Suzanne Bolanos issued her decision in the case of Dewayne Lee Johnson versus Monsanto, letting the jury's decision stand. The jurors unanimously found that Monsanto's product Roundup was a contributing cause to Johnson's case of non Hodgkin lymphoma. Johnson was formerly Vallejo school groundskeeper who applied the glyphosate based formulation daily.

The school no longer uses glyphosate based products.

On Oct. 10, Bolanos had said she was considering reversing the jury's decision, saying she did not think Monsanto had intentionally harmed Johnson as an individual, but after considering the case more closely, she refrained from going down that path. Three of the jurors publicly spoke out against overturning their verdict.

(The punitive damages often go to the lawyers who represent the plaintiff.)

Johnson and his attorneys may appeal the judge's ruling on the amount of damages.

Monsanto's attorneys say they will appeal the jury's decision. 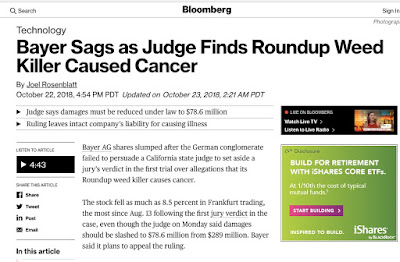 Whether or not the punitive damage reduction will have an effect on Monsanto (now owned by Bayer) remains to be seen, but the stock market has already taken a toll on Bayer, lowering its price by 38% over the period of one year.

The company lost 13% of its market value in mid August in response to the jury's verdict. That represents $11 billion.

There are more than 8,700 additional plaintiffs cases pending in the U.S.

According to Bloomberg's coverage of the story today, attorney Thomas G. Rohback (not involved in Roundup litigation) said the ruling hurts Bayer because "it's saying there was enough science to support the plaintiff's case."

Bloomberg also quoted a London based analyst as saying that if the current level of damages was awarded in the other 8,700 pending cases, Bayer would be facing a liability of $680 billion.

Another Bloomberg story about the case quotes Anna Pavlik, a legal analyst, saying that Bolanos' ruling will make it harder for Monsanto to overturn on appeal.

Bayer's CEO responded this summer to concerns about the August verdict in a video on the Bloomberg site posted earlier: