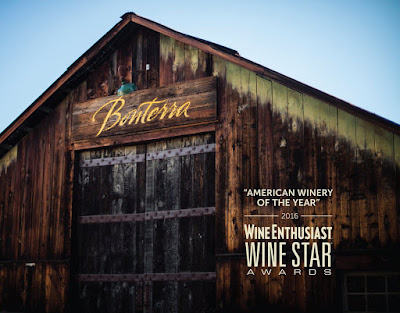 The winery's celebrating with a special history page and video.

Founded in Mendocino by the Fetzer family and Paul Dolan (married to a Fetzer), the brand is today owned by the Chilean company Concha y Toro, the largest Latin American wine producer. Originally the Fetzer founders envisioned a huge wine brand - perhaps as large as Fetzer is today - that was all organic. When the family sold the company to Brown Forman in 1992, the spirits company converted Fetzer to agrochemical wine production for the most part, leaving Bonterra as its only organically farmed brand.

In both 2015 and 2016, Bonterra rapidly expanded, generating 20% growth in revenue each of these two calendar years. It produces about 350,000 cases a year, more than twice as much as its nearest competitor (Green Fin from Bronco, sold only at Trader Joe's). All of its wines are certified and bottle labeled "made with organic grapes."

Thanks to its big distribution reach - from being part of the giant Fetzer brand - often Bonterra is the only organically grown wine on the supermarket or, increasingly, Costco - shelf. At Costco, it's sold for about $10 a bottle; in groceries it's a bit more. The wines are sold in all 50 states and in 23 countries around the world, including Waitrose supermarkets in the U.K.

Fetzer also makes organically grown wines from Chilean grapes, but these are not sold under the Bonterra label.

The brand is also turning over a few new leaves with the departure of longtime vineyard manager Dave Koball, who left last year to take a senior management position at UCANR in Hopland. A California native, Koball was part of the founding of Bonterra, arriving in 1994 (before the brand was created) with a master's degree from Cornell in plant pathology. His first assignment was to convert 172 acres of organic estate vineyards (certified organic in 1987) to Biodynamic certification.

The new vineyard manager (who is featured in the video) is Jon Holzepfel, a 2013 graduate of U.C. Davis who has a degree in plant science and has been part of the grower relations team at Bonterra and Fetzer for two years.

My favorite Mendocino winemaker, Sebastian Donoso of Campovida, also announced on Facebook yesterday that he will be leaving the small, boutique Hopland winery, to join Bonterra's winemaking team.  The Chilean born winemaker started his career in Mendocino working at the artisanal winery Saracina (a label owned by Bonterra founder John Fetzer) under the talented winemaker Alex MacGregor. (David Ramey is the consulting winemaker there, too).

Founding winemaker Bob Blue has been with Bonterra since 1993, when it was started. He and Bonterra's organic winemaker Jeff Cichocki were on hand to celebrate Wine Enthusiast's awards ceremony held yesterday in Miami.

This is the first time the American Winery of the Year award has ever been given to an organic brand. Fetzer Vineyard's CEO Giancarlo Bianchetti was on hand to receive the award.

You may notice this month that Bonterra is promoting - in Facebook ads and on its Twitter feed - that it's bringing back a very popular wine - rosé. 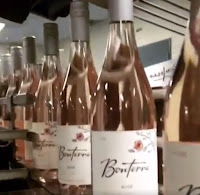 That's good news, since there are never enough organically grown rosés to choose from, especially in the supermarket or at Whole Foods. Bonterra last produced a rose in 2009, but the market for rosé in the last few years has been going through the roof, so it has reintroduced this wine in 2017, with plans to launch it on Valentine's Day.

Here's to a great success story in the wine industry for a brand that makes great, affordably priced table wines and one that is bold enough to stake a claim to farming 100% organically at this scale.