If you are the type of person who reads the labels on food, you may find the lack of information on a bottle of wine a little weird.

Wineries aren't required to state the ingredients on their bottles - but they are required to include a blanket statement on the label that warns that drinking this wine may cause cancer or, if pregnant, birth defects.

While such a label may seem like one of the last of America's strange artifacts of Prohibition, it masks the larger issue of what, besides alcohol, is actually in wine.

Such is the clout of the wine industry. The industry breathed a sigh of relief when it essentially won a victory (which may be only a temporary victory; time will tell) in what I am calling the Great Arsenic Skirmishes, the lawsuit filed by plaintiffs who claim that wineries that produced wines containing arsenic in wine at levels higher than those allowed in drinking water should be required to communicate those health risks to consumers on the bottle label.

(You may remember this story, which first broke in the mainstream media in 2015, caused a hue and cry at the time. Out of 1,306 wines tested for arsenic, 83 exceeded drinking water levels.)

Last week a judge in Los Angeles Superior Court found that the wines exceeding the arsenic limits of drinking water did not need further labeling, since the blanket statement that wine may cause cancer or birth defects gave some indications of risk.

The court did not rule on the issue that arsenic risks are not connected to cancer, or only to pregnant women. In essence, the ruling suggests that since there is some hazard to drinking wine, wineries are not required to label all the risks.

The plaintiffs' attorneys said the ruling will be appealed. Denver attorney Michael Burg said, "We plan to continue fighting to protect consumers and ensure that they get accurate information about the wine they're consuming.

The Denver based company Beverage Grades provided the initial testing identifying the arsenic in wines. Although Beverage Grades is not a party in the lawsuit, it is widely believed to have initiated the movement towards the proceedings.

Beverage Grades now offers consumers a database showing wines that tested the lowest in heavy metal residues in wines which is available online here. Many suspect that the testing facility initiated the law suit to drum up its testing business.

(Read more details about the latest legal ruling at Wines and Vines.)

While the arsenic lawsuit broaches the subject of warnings, it is not an effort to build a movement among consumers who would like to see wine labels provide a full list of ingredients.

Even the august British magazine Decanter has raised the issue, with veteran wine writer Andrew Jeffords calling on the wine industry to label ingredients in a 2014 column you can read here.

In contrast to the wine industry's amazing powers of aversion to ingredients labeling, the largest brewers in Europe and U.S. craft brewers are taking quite a different approach to labeling. 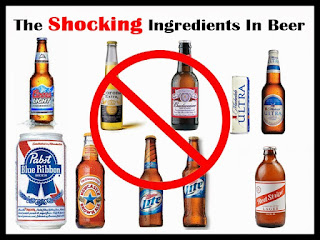 Heineken and Carlsberg announced last year that they will join the movement among brewers to put nutritional labeling on beer. Read more at Beverage Daily.

And in the U.S., the FDA is requiring nutritional information on certain types of beers (including wheat beer), craft beer, and beer served on tap.

Quoted on the ABC Denver affiliate Channel 7, brewer Mike Lawinski of Fate Brewing Company said, "Craft brewers would love ingredients to be listed...because that's what really separates us as 'craft'' and a lot of the bigger breweries are using GMO ingredients and high fructose ingredients."

The whole GMO-in-my-beer issue has raised a lot of public interest.

In a parallel universe, when will the fine wine industry in California wake up and see that people want to know what's in their wine? Not just the arsenic in 83 wines, but the whole enchilada?
Posted by Pam Strayer at 2:44 AM