2016 #AlsaceFest Seminars Show the Love for the Many Faces of the Four Alsatian Noble Grapes - Part 1: John Winthrop Haeger on Dry Riesling 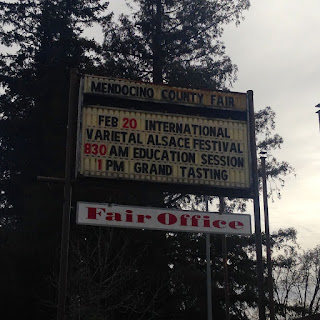 I have to say, I learned a ton at the Anderson Valley Alsace Festival held yesterday at the Mendocino County Fairgrounds in Boonville.

This annual event is put on by the Anderson Valley Winegrowers Association. It's the winter cousin of their more famous Pinot Noir Festival, which takes place every May.

Some of the charm of the day was due to simple, noncommercial beauty of Anderson Valley, which remarkably is pretty much the only outpost in California wine country with great wine without a lot of pretense.

It's a reminder of how rustic and uncommercial Napa and Sonoma used to be - but Anderson Valley has better grown and better made wine than in those olden times.

While Anderson Valley has lagged significantly behind other Alsatian wine growing regions (Oregon and Alsace for instance) in organic and Biodynamic viticulture, there are signs that times may be changing here - albeit slowly.

The 160 AlsaceFest educational seminar attendees were fortunate to have John Winthrop Haeger lead a morning session that began with his take on the current scene in all things Riesling.

In his new book Riesling Rediscovered: Bold, Bright and Dry (read Stuart Piggot's review of the book here), the latest wine book from U.C. Press, Haeger's focused on a broad array of Riesling producers from around the globe. It's being widely acclaimed as the leading serious wine text of this generation to focus on Riesling - and what a story there is to tell.

• Riesling is the 7th most grown varietal in the world
• It's stress tolerant as well as drought resistant
• Like Pinot Noir, it's very expressive of the site where it was grown
• It lends itself to a very wide spectrum of styles (sweet to dry)

Surprising to me was the fact that it wasn't until 1950 that sweet Riesling became the popular style of Riesling. And it was only when it became sweet, said Haeger, that Germany became a wine drinking country.

That was true - until 1975, when the whole style changed during the "the dry wave" - or the Trockenwelle. In that period, dry Riesling reasserted itself, and today 75% of riesling is made in this style.

That's true only in Europe, though. Here in the U.S. 80% of riesling sold is sweet or sweetish. But in Haeger's tasting session, the focus was on dry U.S. Rieslings from several diverse regions. 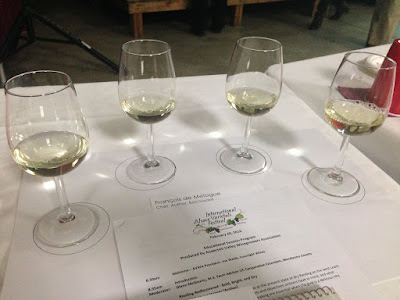 The morning panel of winemakers featured wines from Willamette Valley in Oregon, Yakima Valley in Washington and two California regions - Santa Barbara County and Mendocino County. For more on them, see Part 2.

To read chapter 1 of Haeger's Riesling Rediscovered, click here.
Posted by Pam Strayer at 10:34 AM