That great pastime - beach reading - calls for a certain type of book. Nothing too heavy and yet nothing completely banal. Beach reading must be intriguing and engaging enough to distract you from your everyday cares and woes.

Luckily the world of lightweight mysteries centered on wine is rapidly expanding. Ah, you can breathe easy, knowing that wine lovers everywhere can sit on blankets over the sand and imbibe the literary equivalent of a rosé.

Three authors have French wine series that invoke different wine locations and winemaker characters in French locales. A fourth author, whose book I have yet to read, has written a novel featuring a biodynamic winemaker in Sonoma. 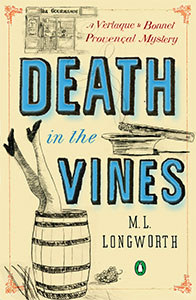 Death at the Chateau Bremont, Murder in the Rue Dumas, Death in the Vines, and Murder on the Ile Sordou (the last takes place off the coast of Marseille) are all based in Aix en Provence. The main protagonist, Antoine Verlque, is a judge; his girlfriend is a law professor.

"Longworth's voice is like a rich vintage of sparkling Dorothy Sayers and grounded Donna Leon," said Booklist of the first book.

I would add a food writer in there, too. Her engaging books have lots of tantalizing descriptions of local cuisine. It might be best to pack some small morsel of fine cheese (and wine, if you can) into your beach basket, unless you think a soft serve ice cream cone from the beach shack will tide you over. You may find yourself searching for "French bistros" on your cell phone once you start reading.

Longworth knows Provence well, living there with her family since 1997. The book explore deep French history and Provencal customs in the background, which may sort of give you a feeling of "I did go somewhere this summer."

Parisian based Balen and Alaix, who resides in southwest France, cooked up what is now a 22 book series on the Winemaker Detective character of Benjamin Cooker, a critic who writes an annual wine guide. Cooker is quite different from Parker. For one thing, he's half French and half English and is married to a French woman. 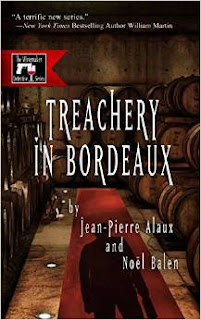 Though he lives in Bordeaux, the various books take him to Burgundy, the region where Cognac is made, and other wine areas in France.

Slightly reminiscent of Inspector Morse in his tastes - he has a Mercedes, enjoys cigars and enjoys other slightly Continental tastes - Cooker is a man of heart and soul as well as logic. He loves his wife, his daughter and his dog.

The authors let us know they prefer the French mystery write Simenon's slow expository style to staccato, fast paced, action mysteries (think Daniel Silva), and attract readers with a taste for the former.

The books are short - typically around 150 pages - and generally take me no more than 2 hours to read. Perfect for an afternoon in a beach chair.

For those who enjoy to watch their winemaker detective adventures on the screen rather than on the page, there are also audio versions of the books, and, best of all, a French TV series (subtitled in English) called Blood in the Vines that is available either by DVD or streaming. The TV series is a fast and loose adaptation of the books, so if you've read the books, don't expect the plot and characters of the videos to be the same. Pas du tout.

Reading the novels won't clue you in, as the plots and characters in the TV series have been altered from the books.

A novel, not a murder mystery, Laura Dave's story 800 Grapes - about a Sonoma winemaking family has gotten a heap of praise from Glamour, Marie Claire, and other media. I have it, but haven't read it yet. But that could change this weekend...

There's a video interview, an audio excerpt (from the audiobook version) and an excerpt all on the publisher's web site.