Old and New: Alexander Valley's Organic Side Is Growing

Alexander Valley - it's that sunny, enticing part of Sonoma county north of Healdsburg where the views from Route 101 are no longer of big box stores and gas stations but of a broad valley displaying its green vines running down ridge spines.

It's the kind of magical place where you put the convertible top down and motor down country roads lined with picturesque old houses and acres of vines and get that rush of "I LOVE wine country" in your bones.

This weekend the region celebrates with its annual Taste Alexander Valley event. Festivities include lots of food, wine and live music at participating wineries. 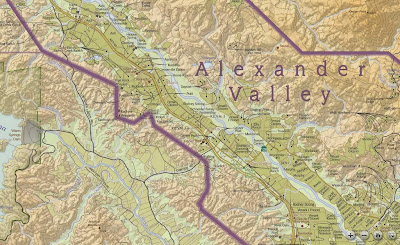 Everyone knows Alexander Valley's famous for its rich history - from prunes to grapes. But did you know how entwined its history is with organic vines?

I hadn't known until I visited two local wineries yesterday on a day that, purely synchronistically, turned out to cover the alpha and omega of Alexander Valley - and perhaps of Sonoma County, too.

There are four wineries with organic vines here (north of the town of Healdsburg):

• Ridge Vineyards: 52 acres of organic vines in Geyserville (plus 150 more in Dry Creek Valley) (cases NA) (the estate is in transition to 100% certification)

Though the region is not what comes to mind when  you think "organic" and "Sonoma," that's more than 10 percent of the county's 1,000 acres of organic vines (out of 60,000 planted acres total).

I visited Alexander Valley Vineyards and Medlock Ames, both on vineyard tours yesterday, where the contrast between the old and the new made for a great, all-in-a-day's adventure.

Now his son, Harry Wetzel IV, of the Wetzel's third generation, is selling his newly released organically grown Cabernet Sauvignon (728 cases made/$28), alongside his father's eggs, at the family's Alexander Valley Vineyards, a 660+ acre spread (with 220 acres in vines) located on the original homestead of the area's first white settler Cyrus Alexander (who came to the area in 1842).

While the family lives in the oldest house in town, adjacent to the Alexander family's old adobe, one of the oldest structures in the county, their 8 acres of organic Cabernet Sauvignon vines are the newest to be certified by CCOF in Alexander Valley. 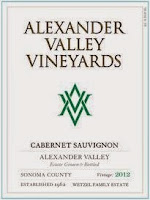 Alexander Valley Vineyards, the first winery to be built in the region in the 1960's, offers a splendid vineyard tour Mondays through Saturdays at 10:30 ($50, including tastings, guided tour and lunch) that takes visitors through the vineyards and historic buildings on the site - an enjoyable peek at Alexander Valley's 19th century roots.

The winery's expanding and has recently added a second crush pad. The 2015 vintage will be its first year of operation.

The winery kindly labels its organically grown wines "Ingredients: Organic Grapes," so consumers can be sure organic grapes are in the bottle.

Down the road, the new kids in town run a winery called Medlock Ames, which you might call a college bro winery. It's owned and operated by two guys who were Tulane University roommates back in the day - hedge fund proprietor Christopher Medlock James, who funded its initial investments, and Ames Morrison, who oversees operations and winemaking.

Medlock Ames embodies the founders' own organic values - Ames is a third generation organic farmer - while also catering to a younger, hipster crowd.


Medlock Ames began with a commitment to organic viticulture, with an unexpected look backward, as well, when the winery, about to rip out a block of Merlot, decided to test the vine's DNA.

Little did they know they possessed one of the few plantings of the Jefferson clone, which, as legend has it, is reputed to date back to Jefferson's importation of vines from Petrus on his 18th century visit to the famous French estate.

The winery located a nursery in upstate New York that was still selling this clone and planted more of it on Bell Mountain. It's now bottled and released as their Heritage Merlot.

Medlock Ames is also working toward certifying its winery as organic (in addition to its vines) which would give it the option, down the line, to potentially make wine certified as "Made with Organic Grapes" and label that on the front of the bottle.

Dig a little deeper into Alexander Valley, and you'll find that one of the AVA's most historic (and now certified organic) vineyards was planted way back in 1882. The Whitton Ranch, owned by the Trentadue family and under long term contract to Ridge Vineyards, has 66 acres of old field blend head trained vines of more than 28 different varieties. The oldest section, known as The Old Patch, is 6 acres planted in the 1880's. There are three other surviving blocks planted in the 1890's.

Interestingly the vines were planted by A. Bouton, a well known orchardist who attracted the attention of Luther Burbank. According to the Trentadue family's web site, Burbank visited Bouton's orchards and vines frequently and influenced Burbank to come to Sonoma, where Burbank then settled, living in Santa Rosa and working on his research farm in Sebastopol.

The Trentadue family also has their own deep connection to orchards and vines. The family had been growing apricots and cherries in Santa Clara but fled the area in 1959 as commercial and residential development encroached. They resettled in the then remote Alexander Valley in the early 1960's to raise apples, pears, prunes and wine grapes. The 200+ acres of land they purchased included the 66 acre Whitton Ranch.

A field blend of Zinfandel, Carignane, Petite Sirah and Mourvedre and other varieties, Whitton Ranch is the oldest vineyard Ridge farms and is the source for Ridge's magnificent Geyserville Zinfandel, one of the country's best known old vine Zins. About 40 percent of the vines in this blend come from the oldest vines. This year (2015) the wine will be made solely from certified vines for the first time.

Learn more about this historic vineyard in the video below.

Tucked away on a quiet lane overlooking the valley, this 200+ acre estate is the wine project of Fahri Diner, a tech entrepreneur from Cyprus, who's established a personal organic paradise, complete with organic veggie garden and personal chef, on the property.

The winemaking is under the supervision of Philippe Melka, one of the leading French wine consultants who also lives and works in Napa for elite wineries. Melka recommends to his clients that they farm their vineyards organically.

Slipstone makes only about 500 cases a year of (mostly) red Bordeaux blends which are priced around $85.

The property is located next door to the Jackson family home, where famed Biodynamic wine consultant Philippe Armeniere was once hired (in 2000) to start a Biodynamic vineyard for Jackson. (The vineyard is no longer there.)

Skipstone was certified in 2008.

It keeps a low profile in terms of wine tourism and visits are by appointment only. Most of the wines are highly rated and are allocated to wine club members.

If you're feeling inspired to experience some of that Alexander Valley historic vibe and its May sunshine for yourself, this weekend's the 18th Taste Alexander Valley event with food and live music at many of the participating wineries.

The three day events gets started with a barn dance Friday night. Ticket pricing and details can be found here.

Starred wineries are participating in the weekend festivities.

AVV will be serving forth a flatbread with goat cheese (to pair with its white wines) and a pork tenderloin with cherry and japapeno sauce (to pair with its Cabernet). Cave tours and barrel tastings will be offered at noon and 3 pm (free).

The tasting room at Medlock Ames will be 20% off on featured 2013 wines.

The 2013 Russian River Valley Chardonnay will be a featured wine and will be paired with truffle Mac and Cheese.

A special Meet the Winemaker event is scheduled for Sunday from 2-3 pm (10 guests only - call to reserve).

Ridge's winery is located in Dry Creek Valley (not Alexander Valley so it's not part of the weekend festivities). It is open for public tours and tastings daily.

Tours are available by appointment only.