The Great Grenache Roundup (Organic or Biodynamic, Of Course!)

My latest copy of the Connoisseurs Guide to California Wine arrived in the mail this week and is always good for a quick read. I never understand how they select which wines to review (as many of my favorites are usually not included - oh well) - but since I am still in the stages of acquainting myself with their preferences and predilections, I read them.

In this July newsletter, they have a more newsworthy preface than usual, since the issue focuses on Syrah and Rhone wines. One of their trends they describe is that Grenache and Marsanne have big potential in California.

Leaving Marsanne aside (whilst hoping Bonterra's new owners decide to try making it again), this was my jumping off point for deciding to do a roundup of Great Grenaches. And the more I looked, the more interesting the story of the organic California grenache became.


After all grenache is the second most widely grown grape in the world. It does seem curious that California's been so intent on chasing harder to grow red grapes, while Grenache has been a comparative rarity.

It turns out Robert Parker (quoted here from Vinography) has been wondering the same thing - why Grenache hasn't been more widely grown in California and isn't more appreciated.

Parker maintains that it is consistently underrated and under recognized both as a wine that can have some of the complexity and expressiveness of good Burgundy, as well as being a fabulous match for food.
"I find myself buying more and more Grenache based wines as I get older," says Parker, who says he is drinking younger and younger wines because he doesn't have the time to wait for current vintages of Bordeaux, for instance, to age properly. Because of its sensitivity to light and air, says Parker, he thinks Grenache based wines are best in the first 10 years of their life, though he notes that some can last much longer.

Originally from Spain, garnacha, as it is called in Spain, is widely grown in France as well. Grenache (the French name) predominates in Rhone blends in France and makes up the greatest portion of southern France's famous Chateauneuf de Pape. Grenache is usually blended with other grapes, and a GSM (Grenache, Syrah, Mourvedre) blend is one of the most common.

California has lots of great grenache growing territory (from Lake County to the Central Coast), but it's pretty much underexploited. Organic and biodynamic grenache is rare - but most of the offerings are high quality and a treat to explore.

Imported grenaches are rarely organic or biodynamic (those that are are on par in terms of prices compared to U.S.) so we owe the California producers in this roundup our thanks for making this available to us who prefer to source our wines locally.

The CGCW newsletter lists only one grenache from an organic producer - Tablas Creek's Cote de Tablas, a GSM blend - but there are many other worthy contenders. The original Rhone Ranger - Bonny Doon - offers us the perennially famous Cigare Volant, its homage to Chateauneuf de Pape, and there are many other wonderful GSM blends and predominantly grenache varietals to sample.

Almost all the main wine growing regions of California can grow grenache, which loves our heat and sun, but almost all the organic and biodynamic grenache in the Golden State is clustered in Monterey County and the Central Coast where the following producers grow a variety of other Rhone varietals as well:

Notably there is one old vine grenache vineyard - Testa in Talmage, in Mendocino's hot Ukiah corridor - that has 40 to 90 year old organic vines that go into Horse & Plow's Old Vine Grenache - only 50 cases are made - that is definitely worth sampling.

Here are four lovely Grenaches for a modest (like mine) budget.

Qupe's tasting notes call this 100% Grenache "almost Pinot-Noir like in its structure and weight" and I agree, though the notes also go on to say "and yet when you smell and drink it, it is clearly Grenache!" (Agreed as well.)

(For those of you who have yet to discover Qupe, it, along with Jim Clendenen's Au Bon Climat, is one of the three leading organic/biodynamic pioneers, along with Beckmen, of the organic/biodynamic outpost of the Santa Barbara County wineries. A small group indeed - alas - but happily these three make up for their tiny size, compared to their nonorganic neighbors, in quality.)

The back of the label says this wine is dedicated to "Robert M. "Bob" Senn, the Rock on the Coast, early Grenache advocate and Qupe customer #001." I called the winery to get the real story and was told that Senn (now in the next world) was a leading light in putting Santa Barbara County on the map as wine making region. That he had a radio show in the 1970s - yes, the 1970's - on SB County wines (this beats Gary V by 20 years). He had a famous wine shop, LOWSA - Los Olivos Wine and Spirits Emporium - which was the Qupe tasting room until Qupe got a tasting room. He was also Qupe winemaker Bob Lindquist's best friend. I'm hoping he liked 100% Grenache - it's so unusual, but so delicious, you do kinda wonder why it's so often blended. Nice to have the option to taste it on its ownsome for a change.

Qupe's Grenache is fermented with natural yeasts and then aged in neutral oak, sur lees, for 17 months. More from the winemaker's tasting notes: "elegant yet racy with wild cherry, spice and herbs-de-Provence...great intensity and balance." Yes.

Where to Buy: Online or at winery; I just found it online by the case at Suburban Wines for $16.99 a bottle. (Ordered a case). Even with shipping it's about $20 a bottle. Extremely good value. 50% off basically. I've no idea why it's discounted so heavily. That is what below a trade discount or wine club member price - so go for it! 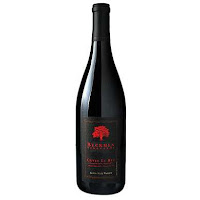 Robert Parker loves it and so do countless others; Parker calls it "one of the finest bargains year in and year out" - and not just of California. In his own Wine Bargains book, he calls it one of the "wine world's finest bargains...an ideal bistro red, delicious and personality filled." It's a fantastic and affordable GSM blend.

Where to Buy: Available in my local market (Berkeley Bowl); I've also seen it at Whole Foods (I think). As always, the winery is an option. A good wine to buy by the case and stock as a house wine since it really has year round appeal. Big hearted red. 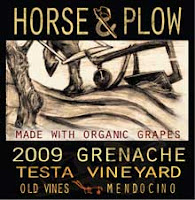 Testa is an old Italian family vineyard (and newly reopened winery) in Calpella, near Ukiah in Mendocino County. (I've posted two articles about it here already but never realized it had a grenache planting.) While a fair amount of grenache is now being grown in Lake County and once was in Mendocino, Mendocino's current grenache profile is pretty low. But this historic vineyard stands out. Horse & Plow makes only organically sourced wines and this one, like most of their wines, is unfined and unfiltered. It's 90% grenache with 10% carignane (which Testa also grows organically).

This is a very lovely grenache, and I'd put up right up there with the Qupe. I'm ordering a case!

Where to Buy: K&L Wines carries it or you can get it from the winery.

Coming soon...I'll post about the more expensive organic Grenaches in the $20 and up range.
Posted by Pam Strayer at 2:40 PM