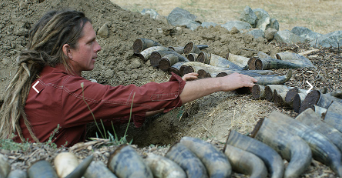 Biodynamics gets a starring role in the new wine series launching Jan. 4 on Amazon Prime.

Episode 3 of the new series It Starts with Wine showcases the Biodynamic wine program at Bonterra in Hopland. It couples the story of Joseph Brinkley, vineyard manager at Bonterra, with a local burger shop chef, adding in the natural beauty of northern California in Mendocino and Sonoma. Food, wine and travel - all together.

While the series is aimed at a general audience, it's no old-white-men-on-wine series like most wine shows. This one's for you, Millenials!

Little of the program focuses on the taste of wine, but focuses rather on selling wine as part of a groovy family lifestyle.

• The down home film stands in contrast to the rarified, complicated world of wine in the Somm films - selling wine as part of everyday enjoyment in life
• It features real wine experts including Glenn McGourty Jim Gordon, and Bob Blue
• It showcases the natural beauty of Sonoma and Mendocino (welcome to see after the fires have dented wine tourism in the North Coast)
• Nice drone shots!
• Reminds one of the way Bonterra originally sold organically grown wine - with organic food - at its early days Food and Wine center in Hopland (long gone), where the greats like Julia Child came to cook

• It focuses on a lot of lifestyle shots as opposed to flavors of wine or really any information about wine
• Bonterra's Biodynamic wine program is the film's focus (290 acres of vineyards and 2,000 cases of Demeter certified Made with Biodynamic Grapes wine), but the wine brand's main production is 498,000 cases of Bonterra wines that are actually organically grown and are Biodynamic. There's really no explanation of organics.
• The film doesn't show the animal integration or other holistic elements that are at the heart of the Biodynamic concept.

All in all, it's a pleasure to see an Amazon Prime series bring the word "Biodynamic" and "organic" in wine in a positive light. 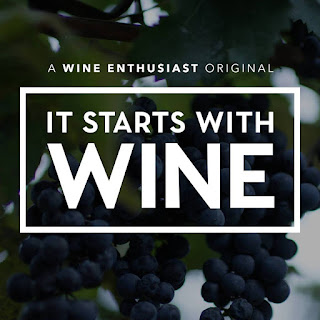 Wine Enthusiast Media is pleased to announce the launch of It Starts With Wine, an original series premiering on Amazon Prime Video January 4th, 2019.

The episodic series travels the globe and follows the world's best winemakers, growers, producers and personalities, along with prominent chefs and celebrities, to offer viewers an inside look at the people, locations, cuisines and cultures that surround the wine lifestyle and the world's finest wines and spirits.

The first episode in the groundbreaking cinematic series features famed chef and restaurateur Francis Mallmann, with acclaimed "flying winemaker" Alberto Antonini, set against the beautiful backdrop of Uruguay and one of the country's premier wineries, Bodega Garzon.

"We felt that the best way to convey these stories was in episodic fashion," says Jay Spaleta, Executive Producer and Wine Enthusiast SVP. "Wine Enthusiast has long been an innovator in wine information, reviews and content, this is the next bold step in that content leadership."
"It Starts With Wine is a docuseries that tells a personal story and shares deep insights in a way that is very approachable, engaging and revealing," continues Spaleta.

Wine Enthusiast Media will be simultaneously releasing episodes I, II and III for viewers binge-watching pleasure. The series will be available on Amazon Prime Video in North America and Vimeo's On Demand premium video service globally.

Episode III travels to California to look at biodynamic viticulture with Joseph Brinkley, vineyard director at Bonterra Organic Vineyards and explores the simplicity of elemental food with chef Garrett Sathre.


Bottom Line: The Biggest Little Farm, a film that had audiences at Mill Valley Film Festival weeping over the beauty of the whole farm approach, is the real deal film about Biodynamics, even though it doesn't show the preps, etc. The documentary has spring 2019 release date and even though it's not about wine, it's the best introduction to the whole farm approach one could get.


Perhaps someone will have the brilliant idea of showcasing the two films together - Double feature, anyone?
Posted by Pam Strayer at 10:57 AM