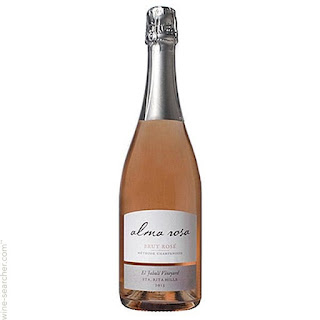 Isn't it wonderful to be alive when so many wineries with organic vineyards are starting to make sparkling wines? It's not like there's a million of them - sparkling wines from organic vines are still rare - but at least there are a few to choose from.

I chanced upon the Alma Rosa tasting room in Buellton last week on a quick tour of Central Coast wineries and was happy to finally understand what had previously been a mystery to me - why Alma Rosa had changed from tasting and touring on its Sta. Rita Hills estate to a tasting room in a warehouse district in Buellton.

And I was delighted to taste their new sparkling wine.

Some quick background for those of you unfamiliar with Alma Rosa's legendary role in establishing the Sta. Rita Hills region - and in fact a great part of Santa Barbara County - as an elite Pinot Noir wine growing region, now of great renown.

For his role in this history, Sanford was awarded a spot in the Vintners Hall of Fame, where he is one of the very few people outside of northern California to be recognized for their contributions.  When he and his original partner Benedict made their 1976 Pinot Noir, one LA Times writer called it "American Grand Cru in a Lompoc Barn."

Secondly, despite incredible financial and business obstacles, the winery is still surviving, now with the financial backing of a fellow Pinot lover, Bob Zurich, and with the advent of winemaker Nick de Luca in the cellar (though Sanford is still the public face of the brand).

Thirdly, remarkably, Alma Rosa is organically farmed in a region where organic viticulture was (and still is) quite uncommon, and it was early to the organic party, being the first in the region to embrace organic practices and certification. (Thekla Sanford grew up on an organic dairy farm in the Midwest and recognized the value of organic farming on their vineyards early on.)

But for the most part, most people know Alma Rosa for none of these reasons. In fact, though, the winery ended up playing a far bigger part in wine history than anyone could have known, when it was the site featured in the 2004 road trip/romcom Sideways, directed by Alexander Payne.

The Alma Rosa tasting room has gone down in history as one of the most famous and iconic sites in U.S. wine history. It was here, in the movie that the character Miles (played by Paul Giametti, in his breakthrough role) introduces his crude but handsome friend Jack (played by the comedic genius who also happens to be a hunk, Thomas Haden Church, in his prime) to the world of wine and specifically to the glories of Pinot Noir.

So it was with considerable disappointment that I heard that the Alma Rosa tasting room had moved into town.


For those who missed the movie, you can, of course, enjoy it on iTunes these days. I just watched it again the other night, and, like many wines, it's aged very well. It's still probably the best film made about wine in America. Americans are drinking more Pinot Noir than ever, and many experts agree that this was the movie that started that trend.


But I digress. Back to the reasons why the tasting room moved, from its hallowed ground to a warehouse in Buellton and to the sparkling wine it makes today.

One, on this trip I noticed, hardly any wineries on Santa Rosa Road still have on-site tasting, with almost all of the wineries serving wine only in-town tasting rooms. (Was it due to changes in marketing or county regs? Were there too many tourists - who had imbibed - on the windy country road? I don't know the answer to that question.)

Second, why Buellton, I'd wondered. What I didn't know was that the Alma Rosa tasting room is right next to one of the most popular casual eateries around - Industrial Eats - which makes its location highly trafficked prime real estate. 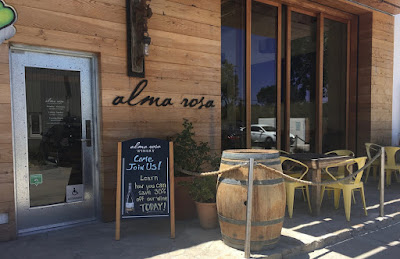 It was a pleasure to grab a few minutes before lunch with colleagues at this groovy modern bistro, (where the chefs really love to slather on the garlic, yum) that enabled me to dash into the tasting room all too briefly. I had only one shot at tasting (time, time, time), so I went for the Brut Rosé, leaving the (sob, sob) Blanc de Blanc behind (it wasn't open).

But since both are made from organically certified vineyards, and you are presumably not hurried, you could take your pick.

My other go-to sparkling wines from organic vines are usually limited to McFadden Brut (made at Rack and Riddle in Healdsburg, experts in making sparkling wines) and their Brut Rosé, but the folks in Mendocino have sold so much of their Pinot Noir grapes to other vintners that they have not been making their Brut Rosé (my favorite) for the last two years. (I bought the last two cases of it when they stopped making it.)

Aside from McFadden, you can also check out some vintages of Domaine Carneros. (Though they made - and bottle labeled - organically grown sparkling wines for some years in the past, the vineyards are no longer organic, but the organically grown vintages can still be found from time to time. Ask at the winery.)

Another Mendocino producer who occasionally makes a Brut Rosé is Handley Cellars, but the vintages are few and far between. (A Brut Rosé is rumored to be making its appearance there towards the end of 2017.)

If you're willing to wait even longer, in the future you can look to Sea Smoke's Sea Spray, a Blanc de Noirs ($80+), for vintages that come from certified grapes. (The 165 acre estate was certified organic and Biodynamic in 2016). It's made on site in what the winery calls its Bubbles Barn.

But it's tough to find this dry (no dosage) beauty of a wine since much of it goes to wine club members (and the waiting list is 4,000 people long, thanks to both the wine quality and the fact that Sideways director Alexander Payne was a member here before he made the movie Sideways). Currently retailers are selling the 2012 vintage. This is a gorgeous wine, made from a breathtakingly beautiful site high above the Santa Rosa Road on the flanks of the Sta. Rita Hills northern (south facing) ridge.

Another producer is Johan Vineyards in Oregon, which makes a Pet Nat from Pinot Noir that I highly recommend, although this style of vinification is not the traditional methode champenoise, but rather the methode ancestrale. 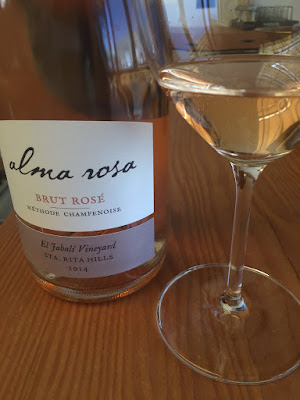 So, if you are a sparkling rosé fan (and, especially in the summer, who isn't?), you might want to seek the Alma Rosa's bottling. The Brut Rosé ($58) comes from Pinot Noir on the El Jabali estate. The Blanc de Blanc ($55) (in very limited supply until the holiday season) is, uniquely, a blend of estate Chardonnay and Pinot Blanc.

While these two wines are made at Rack and Riddle in Healdsburg, the taste is pure Central Coast - a little sweeter, a little fuller, and a little richer.