The twitterverse is alive with OTA tweets as the Organic Trade Association and other organic groups meet this week in DC, paying homage to the Congressional and USDA authorities who can plead their case.

The OTA provided a white paper showing the economic gains that occur in areas where organic agriculture holds sway and pointed to the current trends with this poster: 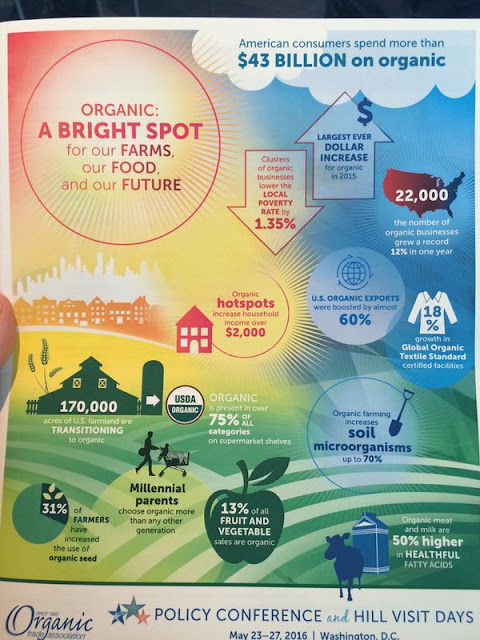 There's a lot of good info here: who knew that 75% of supermarket product categories boasted an organic choice? (Not much in the wine aisle, for the most part). Or that Millenial parents were doing such a good job in choosing organic for their kids.

The real issue at stake is the fact that the U.S. does not grow, for all its ag land acreage, enough organic to satisfy the domestic demand. Hence, the recent story that Costco is paying farmers to grow organic, even loaning them money to buy land in Mexico. (What - there wasn't enough land in the U.S.?) The company has become the biggest organic retailer in the U.S., dethroning Whole Foods in 2015 - and with that demand comes supply issues.

The OTA's white paper, "Organic Hotspots and Their Benefits to Local Economies," released this week, makes the point that organics lift all boats, lowering county poverty rates on average 1.35 percent. 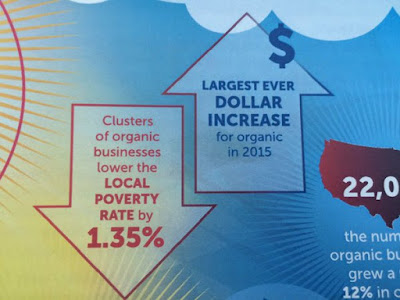 The OTA's study also gave Congressional Representatives fodder on the economic impact of organic farming and handling to their district. 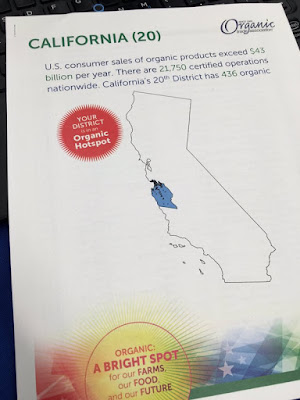 But the report shows some other revealing aspects as well - political schisms that reflect agricultural ones. Take a look at where the organic hotspots are - and aren't.

Do these red and blue blotches remind of you of the red and blue states, only with the colors reversed? Apparently, overall, the country does farm as differently as it votes, a fact I had previously not taken note of. 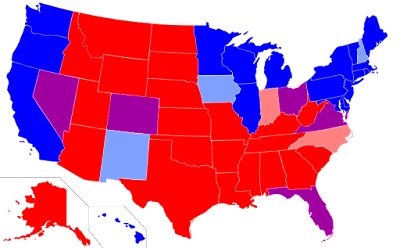 Do you think the blue states (in the political map above) get as much Big Ag welfare as the red states? I am still looking for a map that can tell me the answer to that question.

Until then we can be grateful to the supporters the organic movement has in high places - among them Sen. Jeff Merkley (below) of Oregon and Rep. Sam Farr (further below), from Carmel, who is retiring this year after 12 terms in the House of Representatives.

Merkley is the top Democrat on the U.S. Senate Appropriations Subcommittee on Agriculture and a supporter of GMO labeling. Farr is the ranking member of the House Appropriations Committee's Subcommittee on Agriculture. Farr's involvement in organic legislative support dates back to 1990, when he was in the California State Assembly and sponsored the groundbreaking legislation that created the state's first organic standards.

Two good guys to know - and each has organic ag in their districts, especially Farr. Both received awards of recognition from OTA.


The group also heard from Ambassador Darci Vetter, the Chief Negotiator for U.S. Trade Representative. She spoke on international trade opportunities for the U.S. organic industry. 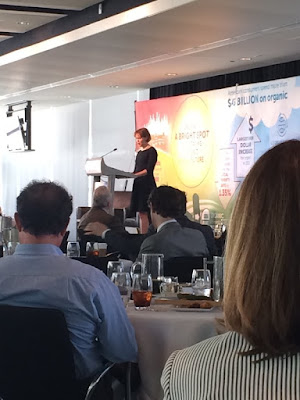 The organic industry is now a $43 billion industry, providing 13 percent of the nation's fruits and vegetables. (And just two percent of its wines).
Posted by Pam Strayer at 5:22 PM