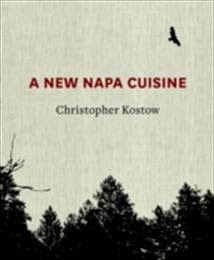 Christopher Kostow's new book A New Napa Cuisine is going to be a big hit - and deservedly so. It's gorgeous, giving nature a glamorous, Zen-like look both on and off the plate.

It marries the philosophy-trained, three star Michelin chef's "back to the land" aesthetic with award-winning haute cuisine and soulful photographs - all introduced by a line from nature's American poet laureate Ralph Waldo Emerson. It's designed to, like wine, promote an appreciation of the good life as that which comes from healthy, vibrant, fertile ground, be it domestic (in the St. Helena Montessori school garden Kostow frequents with his daughter and his dog Charlie) or wild (foraged herbs and mushrooms from the woods).


(Let's remember that it was the local 1968 Agricultural Preserve, which many vintners opposed, and the Sierra Club's lawsuit in 2000 against the county and the vintners that saved these woods from destruction. James Conaway chronicled both of these worthy battles in his two superb nonfiction books Napa: An American Eden and its sequel The Far Side of Eden: New Money, Old Land and the Battle for Napa Valley.)

Bees play a role - Kostow cooks potatoes in beeswax and carves tiny slivers of honey (presumably sourced from Napa) to accompany dishes. The video's images evocatively hark back to a time of natural purity. (Sad it is to find then that in 2012, Napa's vintners and growers applied 1,219 pounds of imidacloprid, the bee killing fungicide banned in Europe, over 4,358 acres - a tenth of the county's vineyards). 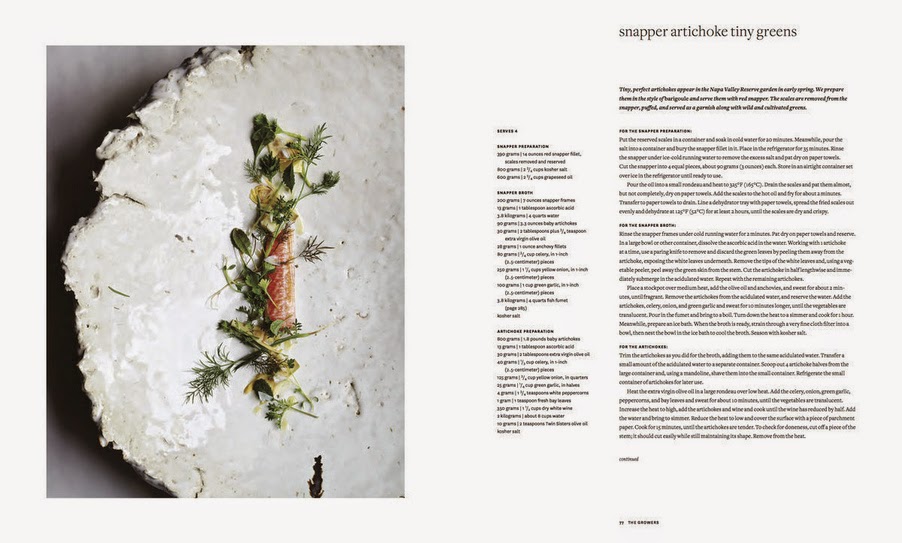 But back to the beauty…the photographs in A New Napa Cuisine are shot by Peden+Munk, who Kostow partnered with on the publication, taken as he was with their style. Indeed, the food photos look more like art than food. This is tweezer cuisine. (This is not a holiday present for a hearty eater or a quick cook - better to buy Mark Bittman's newest cookbook How to Cook Everything Fast for hungry and in-a-hurry-types).

When it comes to the wine, does Kostow's nature aesthetic carry through on the wine list at The Restaurant at Meadowood? It's not usually a chef's prerogative to oversee this hallowed ground, particularly in wine country, but one can always see if the wine program is in sync with the chef's aesthetic.

For those who are looking for organically grown wines, a few from certified vines do appear on the Meadowood wine list (though you would have to be an expert to spot them).

For those who would like to enjoy Kostow's cooking aesthetic paired with wines that echo these values, here are some beautifully farmed wines, on the restaurant's published wine list, to consider:

There's always a leading edge and a trailing edge. Let's hope A New Napa Cuisine, in its real and symbolic effort to replace formal white plates with hand thrown pottery plates, might one day contribute to a new aesthetic about wine and the way it's farmed - i.e. a soil and earth centered approach that doesn't say "let's reach for the Roundup."

Kostow acknowledges, near the end of the book, the history of Napa's environmental trials and tribulations, writing, "Although I have not been here that long and am thus blessed by the ignorance that fact brings, I have read about the battles of the 1980s and 1990s pitting development against ecological preservation [editor's note: the Ag Preserve battle was in 1968], vintners against the farm bureau, and old farmers against an influx of Silicon Valley wealth. Although I have my opinions about these issues, and the embers of these battles are still warm, these things are no more than the landscape that I have found - much like the collective history of a country and a world created the place into which we were all born.

"Is this not the secret to America's success, a collective amnesia that allows us to build on what we find without the shackles that the past creates? Maybe this is the reason that regeneration happens here…"

It's a pleasure to find such a thoughtful and intelligent voice in Napa Valley - someone who's intimately tuning into its present and reimagining its future anew.
Posted by Pam Strayer at 11:42 AM