The Ecofarm Chronicles | Day One

Once again, the farmers went to the sea. The organic clan is gathering for its annual migration to Monterey's Asilomar conference center for the 40th Ecofarm conference. A stellar lineup of speakers enthralled, depressed and rallied the tribe.

Great science presentations are a tradition. This year, pesticide researcher and government whistleblower Dr. Jonathan Lundgren, kicked off the conference with an opening speech on the need for growing the grassroots movement for regenerative agriculture.

A former USDA scientist, Lundgren's research on the effects of neonicotinoids on monarch butterflies was too hot for the chemical industry to handle and it was suppressed.

In 2015, he filed an official whistleblower complaint (during the Obama administration) and was later dismissed from his government position.

Today he works with the grassroots movements in regenerative ag from his farm in South Dakota, (Blue Dasher Farm) and Ecdysis Foundation with students.

"What we need is a Manhattan Project for bees. That is what we need for food production," Lundgren told workshop attendees at a morning session on bees and pesticides. "Millions of dollars have been spent on keeping a broken system. It's time instead to change agriculture."

"Our current systems are fundamentally flawed and heading for a cliff. We need to burn them all down and rebuild them."

"Regenerative agriculture is more successful. The systems are transferrable, scaleable and successful. More organic matter in the soil increases yields." 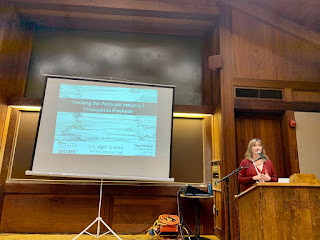 Stacy Malkan of U.S. Right to Know, a nonprofit that focuses on transparency in the food system, talked about the pesticide-propaganda chemical industrial complex, pointing out the heavy disinformation systems that chemical companies utilize to sway public opinion, government policy and science itself. Aside from direct subsidies, the companies employ an army of PR professionals and consultants, she said, pointing to newly released documents.

In a Jan. 2020 article entitled The Playbook for Poisoning the Earth by Lee Fang, Malkan said that recently released documents included in the article show the full scope of chemical industry's influence which is more entrenched and well funded than has been known.

"As Gary Kasparov says," Malkan stated, "the point of modern propaganda isn't only to misinform or push an agenda. It is too exhaust your critical thinking to annihilate the truth." 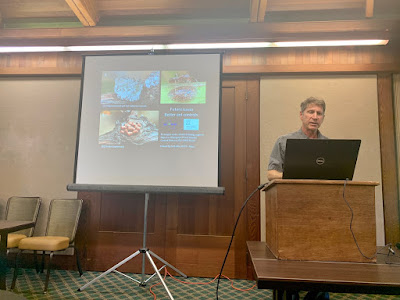 In the past, the dangerous neurotoxin chlorpyrifos has been used in attempts to suppress the vineyard pest. Its use has tapered off, and beginning in two years, the chemical will no longer be available for use in California.

Daane and Amaral outlined major biocontrol efforts with different types of predators and parasitoids and a discussion of the pros and cons of each.

The audience was captivated by Daane's videos of mealybugs secreting poison to kill predator ants.

Growers face difficult challenges in keeping vine mealy bugs in check whether they use conventional  or approved organic methods, though the organic growers' challenges appear to be greater. Growers using conventional methods are spending about $80-120 an acre at a minimum, Amaral said.

An audience member asked Daane about his view of drone programs to drop predator eggs into vineyards. Daane said he thought drone delivery may not be as effective as spot placement of larvae on infested vines.

"First of all, I don't like using the eggs, because they are not as effective as releasing larvae. And when they are dropped by drone, they might fall on the ground rather than the and don't get to the leaves, where they're needed. More work needs to be done to determine its efficacy" he said.

Quinn called on the audience to visualize a new form of homeland security - one that encompassed food sovereignty as basic to security. Tying food to health was another key component of his vision for the future.

Quinn, a grain farmer in Montana, went organic in 1991. He launched the KAMUT brand of durum wheat.

He called upon organic farmers to switch the economic system from Commodity to Community and told the story of a community project to help the local Indian reservation residents switch their diets.

"We live near a large Indian reservation where a many people have diabetes," he said. "Working together we were able to help them start growing their own grain on 500 acres and now they are putting in a new flour mill. We helped them start growing lentils, which they can use for oil, too."

The crowd gave him a standing ovation.

U.C. scientist Surendra Dara presented an afternoon session on beneficials, an emerging area of research in agriculture. Dara has worked food crops but said he will soon be devoting some of his time to wine grapes.

Biopesticide entrepreneur Pam Marrone attended Dara's workshop and the two indirectly discussed possible new fungi based products they might collaborate on in the future.
Posted by Pam Strayer at 4:55 PM 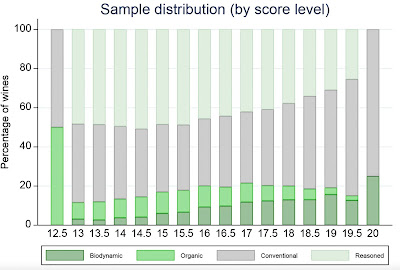