Who can resist these? Enjoy these little pick me uppers on your (relaxing?) Memorial Day:

Posted by Pam Strayer at 5:54 PM No comments:

I wrote about Lee Johnson in my piece on Civil Eats and PRI in March. And I'm planning to be in the courtroom to cover this trial. Carey Gilliam's article in The Guardian is good background for those interested in following this case.
Posted by Pam Strayer at 9:06 AM No comments:

Great piece. Read it here.
Posted by Pam Strayer at 4:51 PM No comments:

Rare Opportunity to Visit Bonterra: America's Biggest Organic Brand Opens Its McNab Ranch to Tours for Rosé All May Event Saturday May 19 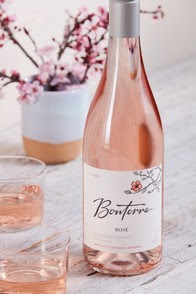 Need to get out and smell the rosé? Bonterra is ready and waiting with tours of its vineyard and winery grounds in Ukiah.

The event is from noon to 4 pm and features Bonterra's new rosé, tours of the Biodynamic (and organic) vineyard and garden, oysters and appetizers, and live music. Gourmet pizza and live music are part of the festivities. You'll also be able to meet the winemakers.

I had a chance to sample it earlier this spring on a vineyard tour with vineyard manager Joseph Brinkley and marketing manager Rachel Newman (pictured above) at the McNab Ranch.

You can reserve a ticket for $60 online or opt for shuttle bus service for the event for $70. For details, click here.

Posted by Pam Strayer at 8:27 PM No comments:

Napa's #1 attraction to most tourists isn't its wines, according to wine tourism research. It's its scenic beauty - its valleys and its steep hillsides, studded with forests of oak trees. But those oak trees - and the water that residents use that's dependent on the oak forests - are under siege.

Now that the valley sites are pretty much maxed out on vineyard plantings, vintners have no place to go in Napa but to head for the hills, which they have been doing increasingly over the last two decades.

Hillside developments were the main subject of James Conaway's 2003 book, The Far Side of Eden: New Money, Old Land and the Battle for Napa Valley, the second in his Napa trilogy focused on conservation battles.

It seemed shocking back then, 15 years ago, to read about dynamiting rocky sites and cutting trees for vineyards, but these practices have continued as a way of life in Napa. 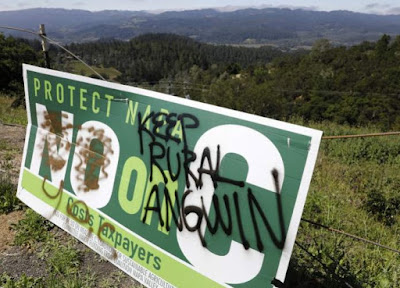 Last year the county approved a development by Texas developer and Napa vintner Craig Hall that will allow him to cut down 17,000 oak trees. And, according to Conaway, in his third book Napa at Last Light (published in 2018), the wine industry pressured the head of the county board of supervisors to put a stop to a similar referendum that was aimed for the 2017 ballot.

Residents were undeterred. They've successfully got the measure on the ballot this year, and are saying: enough is enough.

Concerned citizens have put together Measure C to protect oaks and woodlands and have drummed up a lot of support among the 140,000 county residents. Among their supporters are many current and former public officials in the county.

Counties are often ill equipped to resist the pressures of development, and residents say they are sending a message to wineries: there should be limits on cutting our woodlands and there should be respect for the county's watersheds.

Local organizers have used the referendum tool in previous campaigns and won.

Under Measure C, almost 800 more acres of oak trees can be cut, but then limits kick in.

The vintners opposing the measure have raised more than $500,000 on campaign communications. 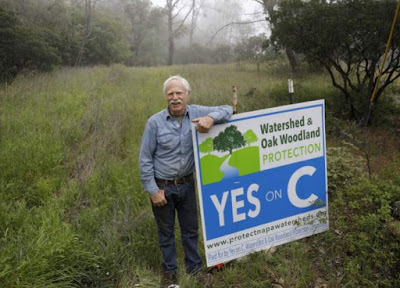 Vintner Randy Dunn says wineries - and the rich people who want new ones - need to come to grips with the fact that "there is no more beachfront."

One battle for the soul is taking place in the Napa Farm Bureau, once the headquarters for the conservation minded growers and supporters.

This was the hangout of Volker Eisele, formerly known as the lion of land preservation in Napa (he died two years ago, after passing important land use measures via referendums in Napa) and of his supporters. Now the Farm Bureau is itself the seat of a major rift, and long term president Norma Tofanelli (a fourth generation Napa farmer and Farm Bureau president from 2013-2016) has left the organization as has Cio Perez, who is now running against incumbent Diane Dillon in the mid valley district for a seat on the county board of supervisors. Dillon is anti Measure C; Perez is for it.

Look at the Measure C web site, and you'll see just a few vintners willing to put their name on the supporters list. But if you're serious about protecting the environment, you might want to support these wineries.

If you've been in the Bay Area long enough to remember the Oyster Wars, in which residents of West Marin took sides in a ferocious debate over whether or not commercial oyster activities should continue on National Park Service land at Point Reyes, you'll know how bitterly it divided the communities. Friendships were lost, relationships torn apart. The same thing is happening now in Napa.

Some locals say that vintners are cutting oaks now before the referendum takes place, in order to avoid having to deal with limits if the measure does pass.
Posted by Pam Strayer at 3:40 PM No comments: