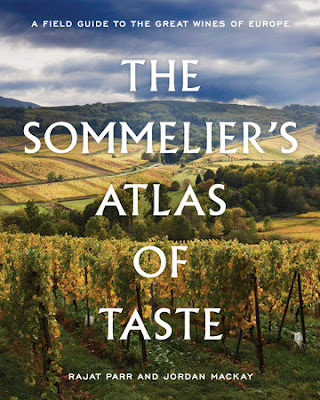 Living in Oakland (as I do) at the epicenter of multicultural, Millennial-moms-and-dads-hipsters-and-real-people-long-term-locals, you can count no less than four natural wine bars inside the city limits (Minimo, Bay Grape, Ordinaire, and Punchdown, the last being the place where I cut my teeth on natural wines circa 2010). If I blink, I may miss a new one.

But until I listened to this interview with famed somm Raj Parr on the Cru podcast, I hadn't realized how, 8 years later, a whole generation of Millennial wine drinkers might think natural wine was not only the "it" wines but that natural wines were, more or less "all of it" - i.e. the beginning and end of the wines they need to care about.

Parr, a famous somm and legendary taster, explains in the 2017 interview that the book, The Sommelier's Atlas of Taste, was written to introduce the classic wines, where they come from and why they taste the way they do, to a generation of wine drinkers whose taste for fresh young natural wines should be extended to tasting the great wines of Burgundy, Bordeaux and beyond. Bravo. Some retailers say that natural wines appeal to Millennials because they're less expensive than the classic wines from the great wine regions. But Parr - and his co-author Jordan Mackay, a food and wine writer - urge them to open the door and explore the classics.

When I first looked at the book - a hardcover selling for $40 with the name "Atlas" in the title - I expected to see maps. I was sad to find none. (Granted I'm a map lover, and used to work for a mapmaking company, DeLorme, which published Maine Geographic, the most beautiful official state map ever made, as well as the dry but useful Atlas and Gazeteer series. But still...).

The absence of maps drove me to a dictionary. When then is an "atlas"? An atlas is defined as "a book of maps or charts." The book is just a lot of text. (No Wine Folly style graphics, thankfully; wine is not a piechart.)

In the introduction, Mackay asks us to think more broadly and consider "rendering a map of taste" in words - but I assume (wrongly or rightly) the publisher thought more about economics. Making wine maps is an expensive undertaking. But couldn't they at least have had taste word maps? Or a region's outline? People really find it hard to read these days, especially without visual aids; the book could have been improved with even minimal region or country outline maps. Perhaps we will get lucky and there will be a second "magnum edition" with maps. The publisher, Ten Speed Press, did include photos, which are lovely (many are of the producers) but the visuals rarely shed light on the topics the authors are writing about (except to show us the producers).

Another limitation is that the Atlas only covers European wines and only wines from the classic wine regions there and then only from selected subregions. Although the subtitle of the book says it's "A Field Guide to the Great Wines of Europe," one wonders who wrote the hard to swallow promotional blurb on the inside cover that calls this "the most in-depth study ever published of the world's greatest wine regions." Maybe they could have at least inserted "Old World" as in "greatest Old World wine regions."

Hyperbole aside, what the book is is a diary of travels written by people you wish you could go wine tasting and touring with. This book's list of regions and producers could be your bucket list of wine trips - for a lifetime.

Probably the book should have had a different title - something more along the lines of Wine Travels with Raj and Jordan. Or the Field Guide title. Think of the book overall as a series of great, in depth magazine articles you would have saved. The title Adventures on the Wine Route (by Kermit Lynch) is already taken, but essentially this book is a variation on that theme albeit with important differences - a soil-centric description of each region coupled with top producers, a few choice eateries, and comments/quotes from the vintners the two authors spend time with. The inclusion of the list of top producers is also a great resource you can use to seek out specific wines.

Organic and Biodynamic farming as subjects get mentioned a bit but always in passing. Top producers who mention the subject range from established all stars (Chave, Chapoutier) to those newly headed down that road (Chateau Palmer).

The authors back into the subject of organics when they write, "As we traveled for this book, we found the second most passionately discussed subject by top vignerons (after organic farming) [italics my addition] was the importance of preserving and expanding their own vine selections..."

As there was no specific sidebar or section on organic or Biodynamic viticulture, I had to buy the Kindle version (searchable) to find all the mentions of the word "organic" or "Biodynamic." In Sancerre, the authors, who visited in early spring, write:


"...without expanses of green leaves to distract your eyes, the bleak landscape tells you which vineyards are being farmed organically and which are not. The organic ones show life between the vines in the form of bursting cover crops, flowers and legumes. Herbicide-treated vineyards are obvious - cold, hard, desolate ground beneath and between the vines - and by far the majority, as the overwhelming extent of industrial farming here is an inescapable fact."

(Note: here in California, those green cover crops are not a good way to tell who's organic, because more than 50 percent of vineyards - the vast majority of them non-organic - now use cover crops -along with pesticides).

In Burgundy: "After decades of murdering their soils with chemicals, winemakers have turned more and more to organics and beyond."

In the Rhone, Hermitage producer Chave (who was a huge inspiration for Bob Lindquist of Qupé in California, one of our best Syrah winemakers) merits a few quotes on the organic topic in a sidebar on farming in the Rhone.  The authors write, "Chave reports that more and more producers in the Hermitage are farming organically. Clape echoes this in the Cornas."


Says Duroux, "I think it's the only way...sooner or later everyone here will demand it. The other way is just no longer acceptable for wines like these."...The authors say of Palmer's aspirations that, "not only is organic farming morally and environmentally the right thing to do, the hope is that it also promotes the wine's expression of typicity."

At the International Biodynamic Wine Conference in May in San Francisco, we heard this not in terms of "the hope" but of the wines in bottle. As Mike Benziger describes it, Biodynamic vintners are creating their own "proprietary biology" when they farm Biodynamically, deriving the flavors from their microbial soils, from their geology," etc. etc. Too often somms and the trade believe in the powerful influences of soil types and geology and exposure alone without recognizing the microbial level. Scientists are now finding that what happens below ground in the roots in terms of biology matters more than leaves in terms of the plant's output. What happens in the soil as a result of chemical farming is a major factor that has been looked by most of the industry.

(As an antidote, I recommend looking at Seralini's work on the taste of pesticides in wine.) (I'm traveling to San Diego tomorrow to meet him and am very excited about that).

So it's very nice to see Parr and Mackay touching upon organic and Biodynamic estates along their journey.

I was happy to meet both of them at Oakland's Bay Grape when they visited Friday night as part of their West Coast book tour. Bay Grape offered a wine flight to accompany the event, starting with the sought after Egly Ouriet Brut Tradition Grand Crus ("practicing organic"), from one of the early days grower Champagnes, and a scene stealing wine if ever there was one. The Leitz riesling was indeed very lovely, and followed by the Foillard Morgon (certified organic vines), a Beaujolais that's another knockout. (All are for sale at the Grand Lake shop.)

I look forward to diving in more deeply and savoring this book region by region over the next few weeks and revisiting it over time. My copy already looks quite weathered as my organic Cucumber and Asian Pear Kombucha from Berkeley's Pickle Shop immediately escaped its bottle, which was in the same oilcloth bag as my newly purchased book, to grace the first 50 pages of the book - giving the pages an immediate fermented beverage ritual blessing. I guess.

And yes, in case you're wondering, this is a book that would make a great holiday gift (they're even selling it at Target) for any wine lover on your list. Especially if you paired it with a wine these two mention.