Raj Parr Goes Organic (and Biodynamic) in His New Label, Scythians – and Au Naturel in His Other New Label Phelan Farm 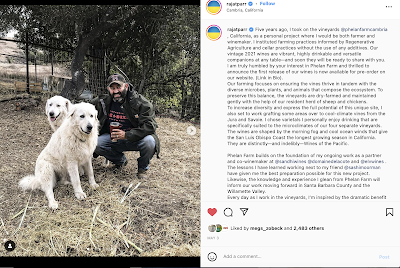 Doing some research to find out if old friends at Powicana were still exhibiting at Raw Wine, I came across an interesting tidbit. Raj Parr was going to be offering two new wine labels and one was from certified organic grapes in one of my very favorite old vine vineyards–Jose Lopez in Riverside County. So I called up Raj and interviewed him about these two new very hands on projects.

Phelan Farm is a property in Cambria, which Raj has leased and is working very hands on in the vines, with his girlfriend J. J., and the ranch manager, and learning about the rigors of life as a vigneron. He says he's farming biodynamically, with a little bit of consulting from Elaine Ingram, and a lot of reading.

Raj: So it started during the pandemic, at Phelan Farm, and it's just me and one part time person alone everything and then last this year has been me my girlfriend and I have an assistant who works in solar and the vineyard so it's just been you know trying to catch up and do all the work in the vineyard is always you know, always step behind.

Yes, the ranch manager's been there from the beginning. And he knows the ranch well–there's also avocados on the property, so he takes care of the avocados and the cows and then also helps me when I need some help the strays and that kind of stuff.

So how are you working with the sprays? Have you had any guidance or consultants or?

No, the first year we did things I'd read or I'd follow Michael Phillips' ideas. This year I used different things. We kind of focused more on compost tea. We worked with a guy who worked with Elaine (Ingram) doing more to get the soil stronger, working so lots of soil sprays in the winter. All kinds of stuff which is because we don't want to irrigate, so it's hard to use the drip line but you might have to do that this winter because it's a much more cost effective we have irrigation set up.
But the irrigation is mostly used for frost control because we get freezes, so I might use irrigation this winter–emitters to do some compost extracts. The land has been no till from the beginning. We just want the sheep to graze.

Yeah, I saw the drone footage it looked like they have like super wide old school spacing–you could drive a tractor through those vine rows.

We only use Kubota–nothing too heavy.

I meant it's a spacious vineyard. The old school sprawl.

Yeah, it's just very rustic...we don't do a lot. We don't do any hedging. It's also a place where you don't have any days above 80 degree so there's mildew pressure.

So how are you dealing with the mildew pressure?

This year we used cinnamon oil.

It's super hard being organic. It's just not an easy place. I also make the wines on other vineyards that are not organic, not far away, at a winery called Stoller. They don't really have any problems [because they spray fungicides]. Here we have a lot because there's very strong mildew.

Did you say that there were already cows there before you came?

Yeah. Plus the avocados–I think they have 20 acres of them. Their business is mostly avocados and cattle. They sell the cattle. I don't use the cows for the manure. We have our own animals–I have my own flock of sheep and chickens and dogs and goats.

We have a sheep, three goats, chickens. I have to redo my chicken program. I have mobile chicken coops. And we're just always always working with guard dogs, too.

So are you living there?

I live about 10 minutes away.

So I take it you've kind of found an area that you really like?

Sounds great. So tell me about the old vines and why are you calling that new project Scythians?

The Scythians were an old nomadic tribe of people from 500 BC. I was just reading about them and listening to a history podcast. And you know, I'm from a different place, and making wine in downtown LA from vineyards planted by a whole different generation of people. And we move our tanks from Cambria to LA to set up a winery on the fly–a mobile winery. And so that's it.

So where are you in LA?

Right now our current winery space is in downtown LA on Eastern. Right by right downtown and East 15th Street.

Near the train station, right? 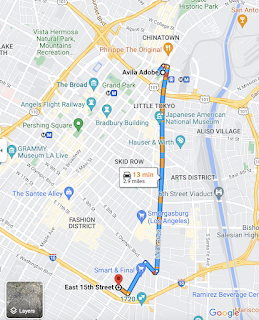 Then you're right near Ramona, the mother vine, right? [I meant the Vina madre at the Avila Adobe on Olvera Street] [Ramona is at Mission San Gabriel.]

I guess so. I haven't heard about it. 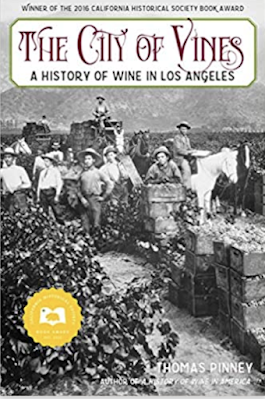 Well, it's definitely worth going to see. The whole story of LA and wine is so amazing, right?

Yeah. I went to a lecture by a gentleman [Thomas Pinney] who wrote the book The City of Vines.

I read I went to a lecture because he's the grandfather of winemaker at Sandhi and Domaine de la Cote. So he went there. And I was just like, wow.

So then me and Abe [Schoener] started talking about it and then he jumped in first and made 2019 and 2020 vintage in LA, and then I made a little bit in 2021. And then I decided to go all in because the harvest dates are so different than in Cambria. Fermenting will be dry, most likely by September 1. And Cambria really won't even pick till the end of September.

Yeah, so I'm quite in love with Galleano and the Lopez. vineyard and everything about Galleano.

I spent about an hour with the Don Galleano several years before he died.

I didn't know Don Galliano but now the relationship with Dominque (Don's son) has started. This year, I think I bought 20-25 tons of grapes from Dominique.

The only other person who was sourcing there really before was Carol Shelton.

Yeah, she was she still does.

Don was really into the heritage and the vines as family heritage.

When I went to visit Don–he lived above one of the buildings on the second floor–and you go over there and he greets you at the door. Remember those old water tumblers that had like the slightly rounded part like an inch below the top of the glass? Like your grandmother had those kinds of glasses. He meets you at the door with one of those with wine in it. A tumbler of wine. Not like a wine glass, not like a little glass-no, a tumbler of wine.

And, you know, just real old school, pure old school old Italian, and it's a shame he died so young. He was a very big personality. And then their old winery, and all those tanks and all their sherries and ports. They mean that Mary Margaret Sherry. Dominique sits around and concocts that, with his friends–blending blending blending. It's pretty fun.

I'm just trying to bring the conversation back to what really the history of wine was because no disrespect to anybody anywhere in California, but Cucamonga doesn't really get any compensation for being part of the history of wine is in California, because as you know, there's so much investment and other things happening in the north stuff and everything is made. So commercial.

Well, yeah, everything was pretty commercial down there too.

Yeah. 100%. But it was big wineries and stuff, but just the history of the planting and the fact that it's still existing.

Yeah, I went to the Lopez vineyard, on one of my trips, I did like just a whole pure wine history for two weeks trip down in Santa Barbara and LA. It was mind blowing. And it was before that book came out. I was like Jesus, you know, when is someone going to write about this?

So that book was really a blessing. And he talked about to everyone I knew. I was hooked on Galleano and put it in Slow Wine Guide, of course. Then there's all the development issues, right where they are losing the vineyards, because of the housing, all that stuff needs to be preserved. So I'm so glad you're in there in the thick of it.

Yes, they have Palomino, Alicante. What they call Mataro is something else I think.

Have you had their Rosé of Peru sherry?

Have you been to the San Gabriel Mission? There was another Ramona Mother Vine there. I have a super beautiful, historic map/drawing by a guy named Michael J. Hart, who was the head of the water district down there. His hobby was making these gorgeous art works that incorporate the history of the water, the farming, the viticulture, and then a little plan of the mission in the middle. 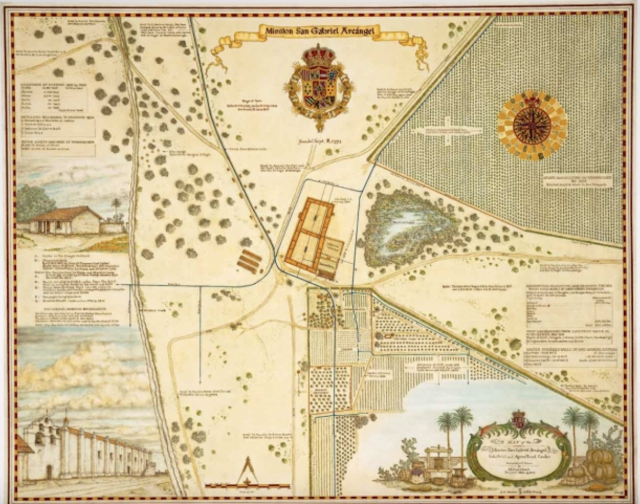 It's map storytelling that I really fell for. The San Gabriel mission is where California agriculture kind of started–because of the San Gabriel River. So what's the one with Mission grapes?

We have Mission grapes in the blend this year and last year. The one I want to send you is 50% Mission and Grenache. This year the blend is going to be Zinfandel and Mission.

And here's a second video with more details:

Marian Farms in Fresno is the Demeter certified vineyard he mentions but not by name. She makes distilled spirits in addition to raising crops. See her Facebook page for more info about her distilled products, which have been featured in the Wall Street Journal, too.